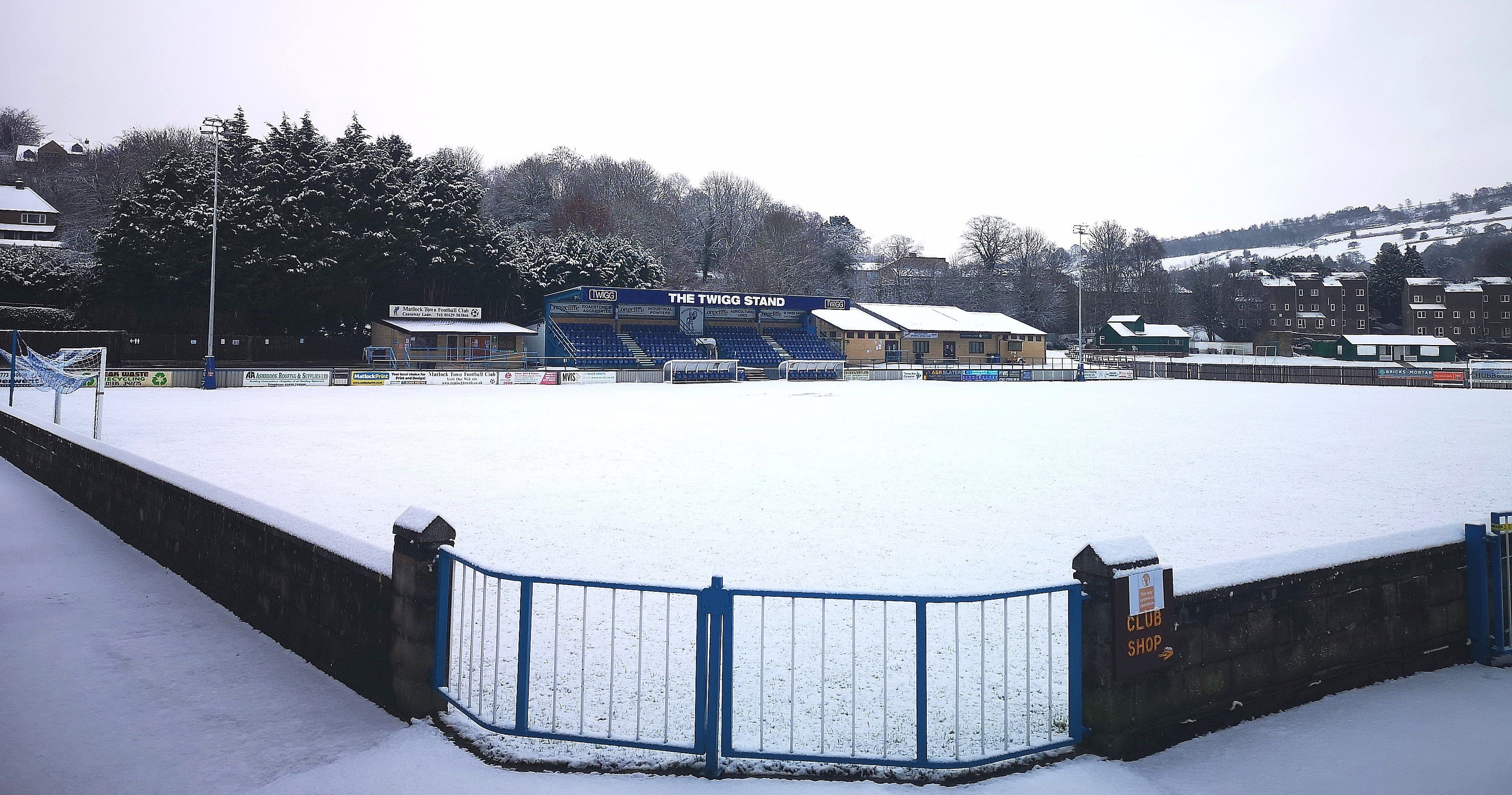 2020 will probably rank as one of the most sad and testing years in the history of Matlock Town. Here’s a brief recap of a year like none or few others.

New Years Day brought about a 2-1 defeat at Gainsborough Trinity as Matlock’s slide down the NPL Premier Division table continued. A single goal home defeat to Basford United when Spencer Harris cracked a second half penalty against the bar quickly followed, not the ideal preparation for the long trip to National League Eastleigh in the Buildbase FA Trophy 2nd Round seven days later.

Matlock had an overnight stay at Nearby Winchester before the Trophy tie and put in a fine performance, being unfortunate to go down 2-1.

The run of defeats ended with a comprehensive battering of Basford in the NPL Cup, Jordan Sinnott cracking in a magnificent hat-trick in what tragically proved to be his last game for the club.

Former Ashton United and Buxton boss Paul Phillips was quickly appointed as Matlock travelled to Mickleover on the following Saturday. But as players and staff met up at the ground, news filtered through of the injured Jordan Sinnott being the victim of a cowardly attack in Retford on the previous night, being seriously injured. The game was postponed as players and staff returned to Matlock before it was announced that Jordan had passed away in hospital in the early evening.

The next match at Grantham was also off following the tragic news which was featured on local and national media.

February opened with Matlock returning to action at home to Hyde United, both clubs paying tribute to Jordan in what was a surreal afternoon. Jordan’s partner and family attended the game with Jordan’s Mum making a moving speech in a packed Shorts Lounge afterwards. .A Piteu Crouz second half leveller earned the Gladiators a point after Hyde had taken an early lead.

Three days later Matlock hammered Radcliffe 4-0 to give hope of better things to come. More bad news for Matlock was soon on the horizon though as goalkeeper Jon Stewart was electrocuted in a serious accident while at work and Matlock had to move quickly for a replacement. Stewart would not play a competitive game for Matlock again.

Barnsley rookie Jake Greatorex was between the sticks as Matlock won 2-1 at Worksop in the NPL Cup and also for the following league game with Whitby which the visitors won 2-0 and the surprise 2-1 home loss to South Normanton Athletic in the Derbyshire Senior Cup. Mistakes by Greatorex in the latter two matches prompted the signing of Kyle Trennerry, the former Farsley NPL title winner.

Matlock drew 1-1 at home to Morpeth in a bad tempered affair which did little to ease now a serious relegation threat. On the following day players, management and officials attended Jordan Sinnott’s

funeral at Bradford City FC, the room being full of Sinnott 25 shirts donated from clubs and individuals from far and wide as the Jordan Sinnott Foundation was set up by Jordan’s family.

A poor performance in a 3-1 loss at Hyde followed and three days later Matlock were two goals ahead with fifteen minutes left at title chasing Warrington, only to cave in and lose 3-2.

That game at Warrington proved to be Matlock’s last game of the season. The Coronavirus pandemic was beginning to take hold, the scheduled home meeting with Nantwich on the following Saturday being called off due to there being symptoms in the Matlock camp.

Eventually after much discussion the NPL season was declared null and void with no promotion or relegation from the NPL Premier Division, a decision that caused much controversy, particularly from clubs in the promotion slots.

Matlock would lose out on valuable income with six home games being lost including a highly lucrative visit from FC United of Manchester when a 1500 crowd was expected. Matlock also accepted an offer from Basford United for top scorer Marcus Marshall.

They set up a Just Giving page and over £17,000 was raised through the generosity of fans, not necessarily Matlock fans, from far and wide.

April is a normally busy month footballing wise was completely the opposite with attention continuing to be focused on fund raising with Matlock making plans to hold a Grand Draw during the coming months. Manager Phillips was already hard at work relating to the 2020/21 playing squad whenever the new season would get under way.

A change at the top was announced as Chairman Tom Wright stood down after twelve years. Tributes poured in relating to Tom’s tenure from far and wide, Tom though would still play a key role in the running of the club in his position as Commercial Manager. Vice Chairman Bryn Apperley took over the leadership of the club.

Paul Phillips was certainly making his presence felt with a host of new signings, some who would remain when the season eventually commenced, some moving on to new pastures. A host of the 2019/20 squad were not kept on as Phillips was keen not to see Matlock fighting relegation as they lay in a precarious third bottom spot when the previous season was truncated.

Matlock eventually returned to action in their pre season friendlies, some of which were played behind closed doors. Training had been hard including runs around the reservoir close to Oldham with Matlock signing a lot of Manchester area based players. Eventually fans were allowed to return to non league games with Matlock officials working hard to ensure the ground and facilities such as the Shorts Lounge were Covid compliant.

After a 1-0 win at Tamworth in their final friendly, Matlock began the season competitively with an FA Cup Preliminary Round clash against OJM Black Country Rangers, the tie being switched to the

Proctor Cars Stadium as the West Midlands Regional League side had ground availability issues. Matlock were narrow 1-0 winners thanks to a 12th minute Ryan Qualter header in an unconvincing performance. They were also unconvincing in the season’s league opener at Bamber Bridge, losing 1-0 when club captain Adam Yates made his 500th appearance for the Gladiators. But things improved after that first day setback, team captain Liam Hughes grabbing both Matlock goals in a 2-0 FA Cup win at Quorn, the 6’3” striker netting again in the 2-0 home win over Stafford and the 2-2 draw with Basford.

Matlock progressed to the 3rd Qualifying Round of the FA Cup thanks to Callum Dolan’s winner at Grantham to set up a clash at National League North Guiseley. Phillips’ side showed no mercy to his former club Ashton with a 4-1 home win which was Matlock’s last home game of the interrupted 2020/21 campaign. Matlock’s capacity had been reduced to 600 under Covid restrictions, 532 atrtended against Ashton, Matlock averaging 476 from their three home league games so far.

The tie at Guiseley, played behind closed doors, proved to be controversial to say the least, Matlock getting the worst of some questionable refereeing decisions in a 2-0 defeat whan they had Liam Hughes and Adam Yates red carded on the field and coach Kade Coppin dismissed during the half time break. Nevertheless Matlock gave a good account of themselves, twice hitting the woodwork on a night when nothing went right for them.

A daunting trip to highly fancied South Shields followed, Matlock coming away with maximum points from a great team performance, Alex Byrne scoring the only goal while a Declan Walker penalty gave the Gladiators another 1-0 away win at Grantham. Matlock were handily placed in the table with thirteen points from their six games played.

The home game with Scarborough was postponed as Covid struck the Matlock team and with the NPL season eventually being suspended, Matlock’s only competitive action would come in the FA Trophy.

Tony Knowles had been appointed as the club’s Vice Chairman.

Matlock recovered from two goals down to finish the FA Trophy tie at Coalville level at 3-3 after ninety minutes before the comeback was complete with a 4-2 penalty shoot out win. Matlock players continued to train independently following training schedules to keep themselves fit in readiness for a return to action when notified.

Jon Stewart made a five minutes comeback in a training game at Wythenshawe which the Gladiators won 5-0 only to hurt his knee again, having originally sustained the injury in pre season against Sheffield. With Shaun Rowley having come in from Solihull, it was mutually agreed to release Stewart from his contract. A popular old face had returned though as Ross Hannah was back after a ten years absence having previously hit 111 goals in his three seasons with the Gladiators. Matlock’s FA Trophy campaign was surprisingly ended away at Coleshill Town, remarkably by a 5-2 margin on a night which proved to be disastrous and calamitous for a Matlock side who had been highly efficient so far this season.

The NPL had surprisingly announced that clubs would be playing league games again on Boxing Day and could arrange games for Saturday 19 December if both clubs were in agreement. The Gladiators were set for a match at Stalybridge on the 19th but taking into account financial considerations with clubs losing money staging games, it was decided to call the game off. The NPL had second thoughts saying games over the festive period would be optional but only one NPL Premier Division game took place with Matlock’s games at Buxton on Boxing Day and the home New Years Day meeting with Gainsborough being postponed.

Who knows? Matlock currently having thirty six more league games in a season which has been already extended until the end of May. Could we have null and void again? One thing seems fairly common from all clubs, they can’t afford to stage games without the additional income from club houses and refreshments, 50/50 draws and the like with only 300 crowds at best. Some may not survive, so the powers that be have to do better than offer clubs loans by making grants available, as has been the case further up the pyramid. All we can do as fans is wait and hope this virus can be beaten without undue delay.