Home // Latest News // A tribute to Ernie by Ian Richardson

A tribute to Ernie by Ian Richardson 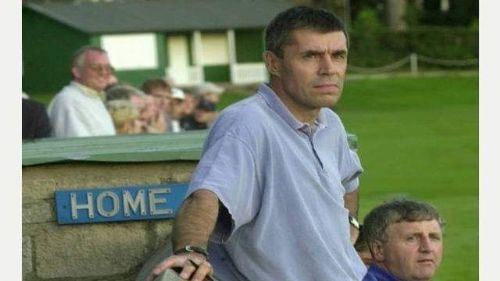 Matlock Town mourn the passing of another former manager following the announcement on Monday that Ernie Moss had passed away aged 71.

Hugely popular in North Derbyshire footballing circles, Ernie will undoubtedly be best remembered for his scoring exploits with his hometown club Chesterfield, making more than 500 appearances for the Spireites and scoring 192 goals. In total he made 749 Football League appearances in a career which saw him also feature at Mansfield Town, Peterborough United, Doncaster Rovers, Port Vale, Lincoln City, Stockport County, Scarborough and Rochdale. He was one of the few players to be a fans favourite at both Chesterfield and their closest rivals Mansfield Town, signing for the Stags shortly after Matlock beat Mansfield 5-2 in the FA Cup Second Round in December 1976.

Ernie had three seasons in charge of the Gladiators and after flirting with the play-offs in the old NPL First Division for a couple of seasons, it proved to be third time lucky in 2003/04 as Matlock finished runners up to champions Hyde United. Matlock returned to the NPL Premier Division after an eight years absence.

During the summer of 2004 though, Ernie made the move to Hucknall Town where it’s fair to say he didn’t enjoy a great deal of success in the Conference North with the Yellows, in fact his stay at Watnall Road lasted only three months.

Ernie had a short time playing for the Gladiators in 1990/91 having previously been in non league with Conference side Kettering Town. He was the Poppies’ leading scorer with 17 goals during 1988/89 in the twilight of his playing career, he would be approaching the big 40 at that time.

Ernie was a studious manager and analysed matches in great detail. Ably supported by his close friend and former Spireites team mate Sean O’Neill, he put together a side that would comfortably hold its own in the NPL Premier Division when Phil Brown and Gareth Williams took over from him after his departure to Hucknall.

A statement made by Moss probably summed up his approach to the game in a nutshell.

“For me, competing was all about the pride and dignity of honest endeavour, and winning wasn’t all about riches and rewards, it was about preserving ones sporting integrity, it was about honour.”

That theme constantly shone through in his carefully prepared programme notes and in his converations with the media.

Ernie would probably admit he wasn’t the most gifted player skill wise, but anyone who can grab 245 Football League goals is surely an asset to any club.

One interesting fact about his goalscoring record is that none of the 245 came from the penalty spot. In fact Ernie only took one penalty and that was in his testimonial game against Sheffield United in 1986, which he missed!

Ernie is fondly remembered by many footballing people, he even has a road named after him near the Chesterfield FC stadium on Whittington Moor, Ernie Moss Way.

Sadly Ernie suffered from Pick’s disease in his later years, a form of dementia. His family have campaigned tirelessly alongside Jeff Astle’s wife and family after the former England and WBA striker had passed away through similar symptoms, siting a link between dementia and heading footballs.

Ernie was much loved by his family and we pass on our sincere condolences to his wife Jenny, daughters Nicky and Sarah, son in law Stu and his five grandchildren Henry, Georgia, Erin, Finn and Callie at this most difficult of times.