Home // Latest News // Bunney is a blue as Phillips pulls off surprise coup!

Bunney is a blue as Phillips pulls off surprise coup! 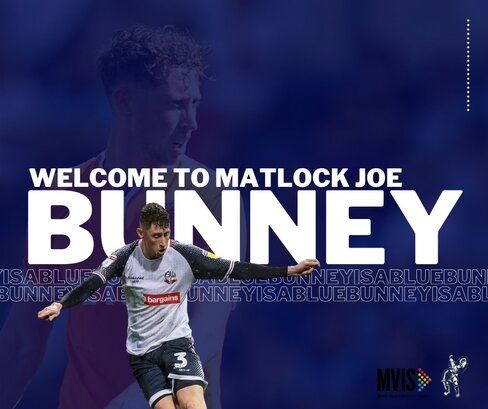 Bunney’s signing was confirmed on Friday afternoon and he will go straight into the Matlock squad for tomorrow’s trip to South Shields.

The 27-year-old, who is over six feet tall, can play in a variety of positions and has considerable Football League experience.

He started out at Lancaster City scoring eleven goals in nineteen appearances before joining Kendal Town scoring three times in only seven games. Moves to Stockport County and Northwich Victoria followed before in 2013 he joined Rochdale on the back of netting nineteen goals in 26 games for the Vics.

He was converted to a defensive position by Dale manager Keith Hill in a five years stay at Spotland spanning 122 games before moving to Northampton Town. He then went on loan to Blackpool and returned to Rochdale on loan before playing at Bolton Wanderers last season, being released in the summer.

“He’s a massive signing for us, when you look at where he’s played he’ll bring professionalism in with him and also add competition for places. He can play as a centre forward where we see him operating for us, or as a left winger or left back. Having played in the league, I know he’s anxious to get back there. He’s recognised what we’re wanting to achieve here he wants to do the best he can for the club and hasn’t come for the money. I’m delighted to have him on board” said Phillips.

With Liam Hughes beginning a three games ban starting at Grantham on Tuesday, Bunney’s signing looks to have come at just the right time for the Gladiators.