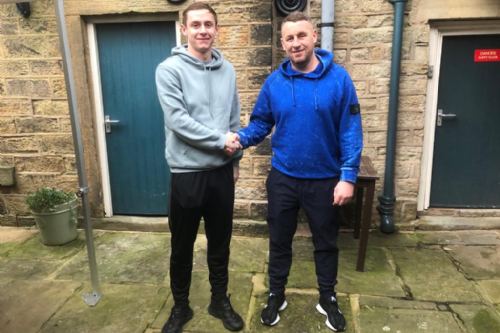 Byrne (28) has been in great form this season and is currently Matlock’s leading goalscorer with ten goals and to boot, has twenty four assists.

Formerly with Shaw Lane, Gainsborough Trinity, Warrington Town and Buxton, he joined Matlock in March 2020 and he was often a thorn in Matlock’s side when facing the Gladiators and now Matlock fans have the pleasure of seeing Byrne inflict pain on the opposition.

A tweet released by Byrne on New Years Day summed up the winger’s feelings with the paperwork now complete.

“Buzzing to have signed for another two years, amazing club going in the right direction. What a start to the new year”.

Both Matlock Chairman Bryn Apperley and manager Paul Phillips could not hide their pleasure at the news.

“I’m delighted Al has committed himself to the club for a further two years” said Apperley.

“This shows the progress the club is making under the guidance of Paul Phillips and I’m grateful to both Paul and Alex for getting this deal over the line.”

Phillips says securing Byrne on a new deal was vital for the club going forward.

“It’s a massive coup for the club, Al’s a player who does his talking on the pitch. He scores goals, he makes goals and he’s the catalyst in a lot of what we do. When a player’s performing as well as Al is doing and his club’s doing well, you get a lot of clubs sniffing around so this deal shows the positive intent from the football club in securing the services of a very intelligent player who’s very capable of playing well in this league and the league above It also shows that off the field, the club must be doing the right things”.

Matlock had a free New Years Day with their fixture at Gainsborough Trinity called off due to Covid issues in the Trinity camp. But the Gladiators stay top after second placed Buxton were beaten 3-2 at home by Stafford Rangers. Town’s next game is at home to Ashton United next Saturday.