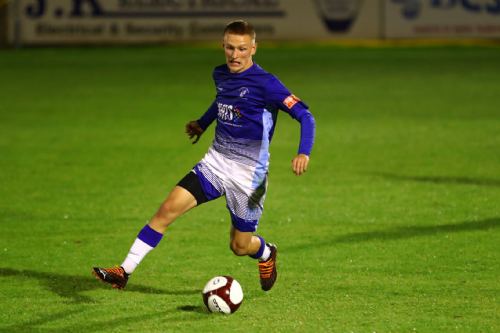 With the NPL transfer deadline window due to slam shut at 5 pm on Thursday, Matlock Town boss Paul Phillips has added a star signing and a familiar face to his squad, bringing in midfielder Danny Greenfield on youth loan from Gateshead.

Greenfield, who turned 21 at the beginning of March, had a similar loan spell with the Gladiators at the start of the abandoned 2020/21 season, turning in some impressive performances and scoring a wonder goal in a 2-0 home victory against Stafford Rangers.

Greenfield was at Manchester United up to under 13 level before joining Barnsley, staying at Oakwell until the summer of 2019 as an academy player before joining the Heed. He caught the eye of Football League scouts, earning a two weeks trial at Sunderland.

Phillips is delighted to have Greenfield back.

“As you know, we wanted to keep him in the first place as he’d done really well for us and then carried that form on in a Gateshead side that was flying. Having not played much recently he wanted a loan spell somewhere else and he actually contacted us asking if we would be interested in having him back. I didn’t have to think twice and with the injuries we’ve got he’ll be a big help. He’ll make up for the quality we’ll be missing with Alex Wiles on the sidelines.”

Bad news for Matlock though is the striker they were after earlier in the week has opted for a higher league club who are offering him substantially more money than Matlock can afford.

Both Greenfield and Osebi Abadaki could make their second debut for the Gladiators against Scarborough Athletic at the Flamingo Land Stadium on Saturday.