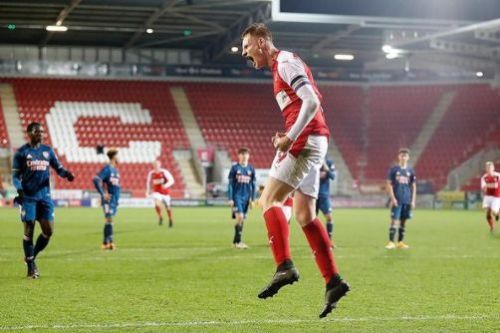 Greaves (18) joins the Gladiators on loan from Rotherham United where he signed his first professional contract last October. The move looked set to go through earlier this month only for Greaves to be taken ill. Now he has recovered, Phillips is delighted to have him on board.

Described as a towering forward, Greaves might just fit the bill as far as Phillips is concerned, with club captain Liam Hughes still under suspension.

Phillips says that Matlock have done their homework in bringing Greaves to the Proctor Cars Stadium.

“He’s scored a lot of goals at Rotherham and the people there think very highly of him. He’s captained their under 18’s and he’s a left footed number nine. Taking a player on loan’s always a bit of a punt, but Rotherham have a very good academy, we’ve done our homework once the lad came to our attention. You’ll not get players as physical as Hughesy but he’ll run the channels more and link up with his fellow striker. Coming to us will do him the world of good, it’ll be part of his education and development, and hopefully he can score a few goals while he’s with us. We’d have got the move done earlier but there was certain criteria that had to be met when he was ill, we’re delighted he’s feeling better again now and part of our squad.”

Greaves will be available for selection for tomorrow’s home clash with Hyde United.