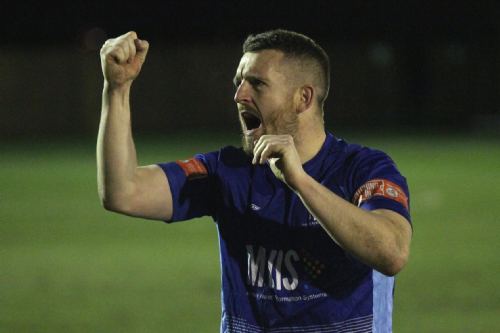 The deals were announced on Monday night as Matlock began preparations for their second successive first versus second clash at South Shields on Saturday.

Phillips and Wild’s agreements last until the summer of 2024 while Qualter has agreed a deal to keep him in a Matlock shirt until the end of next season.

Phillips and Wild have been at the Proctor Cars Stadium for exactly two years now, taking over a struggling side fearing relegation towards the end of the null and void 2019/20 campaign.

The managerial duo strengthened the Gladiators squad with some astute signings ahead of another terminated campaign in 2020/21 with Matlock lying second on a points per game ratio when the season was again halted due to Covid.

This season Matlock are currently battling for the NPL Premier Division title, holding a six points lead at the summit ahead of the midweek fixtures.

Matlock Chairman Bryn Apperley says the trio’s deal extensions are testimony to the hard work that goes into running the club.

“We’re absolutely delighted to announce this news and I’m sure all of our supporters will be equally happy. There were no ifs and buts, it was a case of sitting down and agreeing the deals, twenty minutes later we were walking out with everything in place. Paul and Dave have done a fabulous job, and to have the outstanding Ryan Qualter here on an extended contract is also absolutely brilliant news. It emphasises the togetherness we have and also how hard everyone here is working to bring success to the club and for the town .”

Phillips shared his Chairman’s sentiments but despite Matlock’s excellent season so far, he says there is still work to be done.

“Firstly I’s like to thank the club for the faith they’ve shown in Dave and myself, it keeps things going, continuity id an important thing. I feel we’ve done an okay job up to now but there’s still lots of things we can improve on. I think we’ve got the right ethos in the club, everyone’s pulling in the same direction, we’re on an even keel both on and off the pitch. The right pieces are in there now, but I still feel we can get better, we’ve made big strides over the past twelve months. The club’s in a really. Really good place and with the Chairman’s trust and those associated in running the club we can build something good, not only now but in the long term.”

On Qualter’s new deal , Phillips said it was a no-brainer. The Matlock boss has often sung his praises saying there is no better centre half in the NPL and probably the division above.

“Extending Qualts’ contract was an absolute must, he’s an absolutely unbelievable leader and winner. It’s important we reward the right players at the right time. He went down on Saturday during the match, most players would have come off, but not Qualts, he was there in the heart of the battle until the end, he alongside others are the type of players we need, they’ll fight until the very end.”

Qualter (30), who began his career at York City has been at Bradford (Park Avenue), Ossett Town, Shaw Lane, Boston United and latterly Alfreton Town before joining Matlock in the summer of 2020 and he has become an instant hit with the Gladiators; faithful.

The Matlock fans will be delighted to hear that Qualter took little persuading in extending his stay.

“We spoke two weeks ago, I’m delighted it’s sorted. There’s a fantastic atmosphere here, I’m honoured to be playing for a family club that’s clearly moving in the right direction and that comes from the Chairman and the manager. I’m delighted to be here for the next eighteen months. It’s a great club, the fans are tremendous. I’d already had a few enquiries from clubs as to what I was doing next season but I never thought it was worth mentioning anything to anybody, in fact I’d love to be here until I eventually stop playing.”