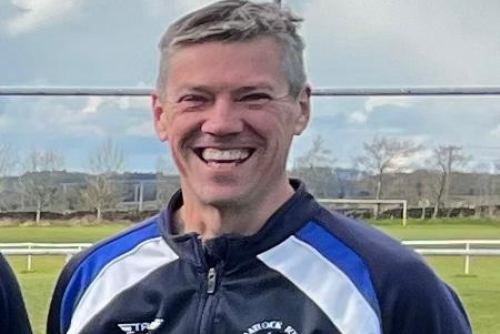 Mr Beaumont’s position was confirmed at a meeting on Monday night.

Jay is a lifelong Matlock Town supporter who grew up in the town and has been involved in various aspects of the club for twenty years.

With the Gladiators having had their best season in the NPL for nearly forty years, finishing fourth and making the play-offs, clearly the aim is to keep the momentum from the 2021/22 campaign and try and go one better in 2022/23.

The new Chairman is also keen to develop the community spirit which has been prevalent during Mr Apperley’s reign. With attendances rising to a season average of 705 with lots of families attending Matlock matches, he sees this as a key factor in what he is aiming to achieve at the Proctor Cars Stadium.

“Matlock Town is a fantastic club which is run wholly by volunteers as a community based club and always within its means, a model that I have always admired and firmly believe to be the only sustainable way to run the club” .

“I want to take this even further, increase the representation of ladies and children within the club on the committees, around the ground and being truly accessible to everyone in whatever capacity you wish to engage in.”

Mr Beaumont also added that Matlock are not going to throw what he calls as “silly money” at trying to achieve the promotion dream.

“There are ways we can do things without risking the future of the club and that’s by working hard to maximise our income streams and ensure that all who come to watch the Gladiators have value for money and a thoroughly enjoyable experience.”

Jay has people who he considers as close friends on hand to help support the work currently being done by existing members of the management committee.

“As soon as Bryn informed me of his decision I confided in a few close friends and asked whether they would be up for joining me and before I knew it we had a boardroom full of us discussing our aligned vision for the club and how we could support the existing committee members in the further development of the club.”

“There was a lot of excitement in the room and an incredible amount of ideas that can help us to improve the club both on and off the pitch, however, remembering that Rome wasn’t built in a day…it was in fact built, and we intend to create a plan then work through it at the right pace.”

Jay paid tribute to his previous incumbent Bryn Apperley knowing he has big shoes to fill.

“Bryn did an excellent job as Chairman and I’ll certainly be calling on him for advice and guidance as we move on. Bryn brought the football club into the Matlock community and obviously this is something I want to develop. We also need to be looking at making developments to our ground which will help maximise income streams and with the support of the existing committee and the people who have indicated their commitment to coming in alongside me, I’m sure we can continue to give Matlock a football club they can be proud of on and off the field.”

Jay is keen to hear from anyone wanting to be part of what he describes as an “exciting new chapter” in the club’s history.

“Please don’t hesitate to get in touch, no matter how small your idea or perceived contribution may feel, this is a 100% team effort.”

Jay can be contacted by e mail on Jason.beaumont@matlocktownfc.co.uk or by telephone 07817 712063.

Mr Beaumont’s position was confirmed at a meeting on Monday night, the vacant position being filled within a month of the announcement that Bryn Apperley had stood down due to vastly increased work commitments.

“I’ve had conversations with Jay, he’s young, enthusiastic and exactly what the club needs at this moment in time” said Phillips.

“I’m hoping we can continue to build on the excellent work done by the previous Chairman Bryn and I’m very much looking forward to working together with him so this football club can be successful both on and off the field.”