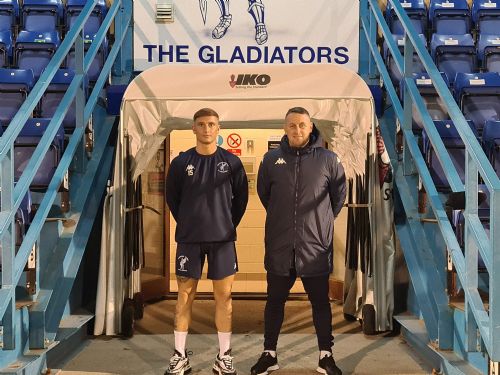 Daly spent ten years in the Manchester United Academy before having a further three years at Burnley. After being at Turf Moor, Daly was at Droylsden, his impressive performances for the Bloods drawing the attention of South Shields and he moved to Mariners Park in February 2019. When he was not offered a contract with Shields at the start of this season, he moved to Curzon Ashton.

“He’s a ball player similar to Danny Greenfield who went back to Gateshead last season, he’s a quality player who’s been there and done it and has played at some top clubs. He’ll give us something different in the midfield rather than the blood and thunder, he can put his foot on the ball and help us retain possession more. We’re really grateful to Kiko Rodrigues of DRN Sports Management for his assistance in pushing this signing through.”

Roberts meanwhile joined Derby’s Academy in 2015 after previously being with the academy at Nottingham Forest. He was a regular in his first season as a scholar with the Rams helping them to a top half finish in the Under 18’s Premier League North.

Phillips wanted to cover all possibilities with important games on the horizon.

“With Shaun’s injury we really needed to sign another goalkeeper and have competition in that position. For me, having two goalkeepers is essential especially with us still being in the FA Trophy. As we found out with Shaun, you never know what’s around the corner. Alfie’s come to us and done really well in training and can push Coops (Paul Cooper) for that number one jersey. I’d like to thank Derby County for their great help in bringing Alfie to us.”