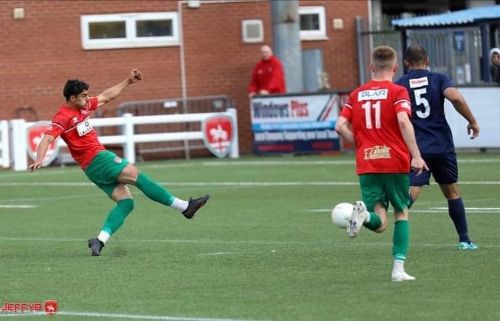 Matlock Town is pleased to announce the signing of twenty-two-year-old midfielder Aram Soleman from Tamworth FC subject to FA and NPL approval.

Soleman was with West Brom as a youngster, playing for their Under-18 and Under-23 sides in 2017 and 2018. He played for them in the FA Youth Cup and also played in three EFL Trophy games. Short spells at Rushall Olympic, Coventry City and Solihull Moors followed before he joined Guiseley AFC on a one year deal for the 18/19 season, impressing the Lions fanbase and management enough in that time with his gutsy performances to be offered a fresh deal but he decided that he wanted to move closer to home and so joined Bromsgrove Sporting for a short time before Tamworth FC came calling and he made a move to The Lamb Ground only for the season to be curtailed soon after.

After starting the 21/22 season with the Lambs, Soleman has decided to make The Proctor Cars Stadium the new home for his footballing talents.

A versatile midfielder who is described by his former clubs as hard working and gifted on the ball, Soleman is at home anywhere on the left or centre of midfield and is even capable as a forward should the situation call for it.

Manager Paul Phillips said the following "I just want to thank Guiseley AFC's joint manager Russ O'Neil for his help on this. Its not that we want to sign more players but with the catalogue of injuries we have picked up it is important we don't over rely on too many of these lads especially with the volume of games we have."