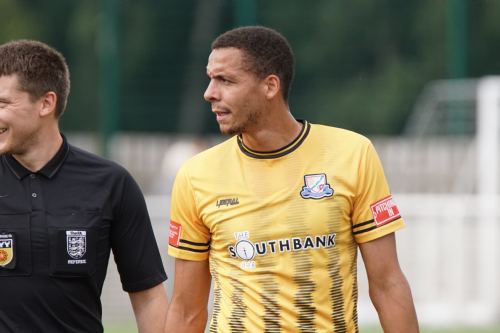 Former Matlock striker Marcus Marshall and winger Terry Hawkridge have both signed for the Gladiators from Basford United for an undisclosed fee, subject to NPL and FA approval ahead of Tuesday night’s home clash with Scarborough Athletic.

Gladiators boss Paul Phillips was quick to move in to add competition for places in the Gladiators’ forward line as the season moves towards the business end.

Marshall was the Gladiators’ leading scorer when he moved to Basford at the start of the Covid-19 pandemic two years ago with Phillips saying there would always be a place for him at Matlock in the future. He began his football career at Blackburn Rovers coming through Rovers’ academy before moving to Rotherham United where he made 51 appearances after previously playing 23 times for the Millers on loan. He later played for Macclesfield Town, Bury, Grimsby Town, Morecambe, Lincoln City and Grimsby Town before entering non-league where he would play for Boston United and then Alfreton Town, from whom he joined the Gladiators.

Marshall scored 29 goals in 53 appearances for Matlock in his first spell at the Proctor Cars Stadium.

Hawkridge started out in non league before playing in the EFL.

He had two spells at Carlton Town sandwiching a stay at Hucknall Town before joining Gainsborough Trinity for the 2012/13 season. He soon moved to Scunthorpe United where he made 56 appearances between 2013 and 2016. He had loan spells at Mansfield Town and Lincoln City during this time before making a permanent move to Sincil Bank. Between 2017 and 2019 he was at Notts County before joining Solihull Moors and Boston United, before his move to Basford earlier this season.

Phillips says he is delighted to add two experienced attacking players to his squad with the season reaching its business end.

“We’re really pleased to bring Marcus and Terry into the club.

Marcus left us a couple of years ago, I really wanted to keep him but Basford was much closer to his home. For one reason or another things haven’t worked out for him at Basford and when he became available, for me it was too good an opportunity to turn down, a no brainer. He was scoring goals in a struggling team so now he’s playing in a team that’s flourishing, we’re hoping he can add more goals. When we spoke to him, he made it clear he wanted to come back, he’s a great lad off the pitch as well so he’ll be a great signing for us.”

Phillips says he wanted to sign Hawkridge when he was released by Boston but Basford beat him to the signature.

“Terry’s top draw, I was keen to take him when he left Boston but he went to Basford. I’ve watched him a number of times and every time I’ve watched him he’s been the best player. He can operate as a number ten or out wide, I’ll be looking for him to do more off the ball which I’m sure he will like everyone else. Our thanks go to Basford for their co-operation in making the moves run smoothly.”

Marshall and Hawkridge are expected to be in Phillips matchday squad for the Scarborough clash.