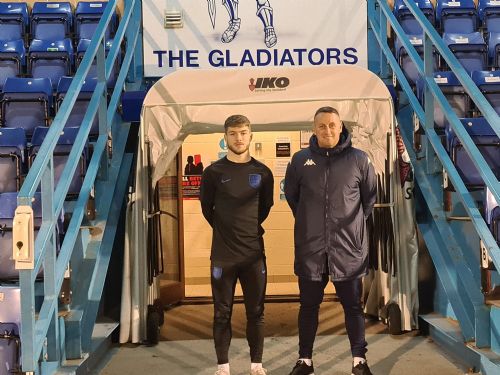 Boss Paul Phillips has added to his Matlock Town squad with the signing of 18 years old attacking midfielder Luke Hall, subject to NPL and FA approval.

The latest addition began his career at Sheffield Wednesday where he had a number of years in the Owls Academy as well as representing England at under 15 level. When his contract was about to end at Hillsborough in May 2021 he had a trial at Brentford.

Hall joins the Gladiators from Sheffield FC having also been at Guiseley on a dual registration basis, playing for the Lions in their 1-0 FA Cup 1st Round defeat at AFC Wimbledon earlier this month and making his Guiseley debut at Darlington a week earlier.

Phillips says that Hall’s arrival has come at an opportune time with Jamie Cooke expected to be out for around two weeks with a tweak in his knee.

“With Jamie being out for a couple of weeks it’s worked out well for us. He’s very much like Jamie, he’s got an eye for a goal and has trained well tonight. He’s had a good upbringing at Sheffield Wednesday and our President Dennis (Hobson) tipped us off about him. We’re a little short now in that number ten area and Luke can fill that void. He’ll be a good acquisition for us.”

Matlock expects to name two more signings before the trip to Morpeth Town on Saturday.