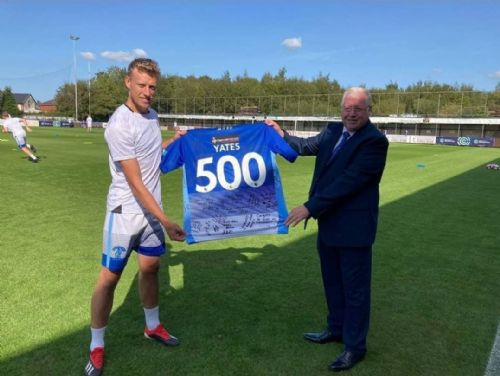 Matlock Town club captain Adam Yates has announced he is retiring from playing.

The Gladiators club legend revealed his decision to chairman Bryn Apperley and manager Paul Phillips last week. It was clearly unexpected with Yates now part of the furniture at the Proctor Cars Stadium, having clocked up more than 500 appearances for the Gladiators since making his debut as a late substitute in a 2-1 home victory against FC United of Manchester in March 2009. He has also been named fans player of the season four times.

For Yates, who turns 32 next month, it is increased family and work commitments that has led to his decision.

“Having recently had a second child and a change of job which is quite demanding, football has had to take a back seat. It changes things for me and my wife Rachel. I feel it’s the right time to step away, I need to be there for Rachel and the kids. Being a semi pro footballer, I’m away from the house on a Tuesday, Thursday and a Saturday. I love Matlock Town Football Club, I love playing football, but I’m the type of person who needs to give everything one hundred per cent, there’s no half measures with me, it’s total commitment and I don’t feel I could carry on doing that. I want to be involved with my kids and I feel that with Poppy, my eldest now approaching five, I’ve missed out on a lot.”

The news came out of the blue to Phillips who is busy attempting to build on Matlock’s promising performances in the curtailed 2020/21 campaign.

“I was quite shocked, having known and played against him and now managed him I knew he was a great player, but I didn’t realise just how good he was. He was one of our best players last season. In his time at the club he’s been through a hell of a lot, both good and bad, he’ll be a massive loss.”

Phillips shares an opinion that everyone who knows Yates or has come across him will share.

“I can’t say a bad word about him, he’s a leader who knows all the ins and outs of the club, he’s been great for me, club captain and a breath of fresh air. He’s part of the furniture, we’ve been so lucky to have him, players like to associate with him, he’s welcomed all of the new lads and made them feel part of the club. I did ask him to reconsider, the door will always be left open if he changes his mind but he’ll always be welcome in our changing room and it’s been an absolute pleasure to work with him.”

Chairman Bryn Apperley says Yates has been a model player and his contribution to the club cannot be underestimated.

“Adam’s been an excellent servant to this club, someone who has always given nothing less than one hundred per cent and it’s been a pleasure to watch him play for Matlock Town over the past twelve years. We’d like to thank him for his fantastic contribution in his time with us and fully understand his reasons for stopping playing. We’re delighted that hopefully he’ll be staying with the club in some capacity.”

Yates echoed those sentiments as he added

“I’m a Matlock Town fan, there’s no other club for me and I’ll come down with the family and hopefully I’ll be able to stay involved with the club in some role.”

Gladiators manager Mark Atkins in a 1-0 win for Matlock in a Derbyshire Senior Cup semi final, he would go on to make in excess of 500 first team appearances .

“It never crossed my mind having come to Matlock as a young lad but Atko (Mark Atkins) gave me plenty of opportunities to play, I took my chance and think I did well playing alongside James Lukic.”

Yates says the highlights of his stay at Matlock have come in cup competitions.

“There’s the Derbyshire Senior Cup wins, I think I actually lifted the cup as captain at least once and the FA Trophy win against Mansfield Town was fantastic. I’m disappointed that we were never as consistent in the league, we didn’t get the success the club and the fans wanted, we fell short. But I’ve loved playing for the club, it’s a huge commitment and from the age of 19 through to 32 I’ve sacrificed a lot but have enjoyed every minute.”

As for the best player he’s played alongside, Yates says “It’s so hard to say, there’s quite a few for many different reasons. I think I can narrow it down to about 2, Ross Hannah for all he did during his time at the club, the goals he scored and the huge amount of pleasure he gave me and the fans. The other would be Zak Brunt, even in the very short time he had with us. He’s such a special talent and I hope he now gets the chance to show everyone what he can do at Sheffield United. But really I’ve got to praise everyone I’ve played with, 99 per cent of them gave their all and that’s what it’s all about.”

Yates has come up against a plethora of talented strikers in his Matlock career.

“It’s not easy to say who’s been my most difficult opponent. When we played Chesterfield in the pre season games, Jack Lester was very difficult to play against, I felt honoured to be on the same pitch as him. As for the Northern Premier League, Mark Reed at Buxton was a special player, I always had big battles with him especially with it being a local derby.”

“Covid made things stop-start, it was nobody’s fault, we were in a pandemic but it was really frustrating as we had a really good squad together that could have gone on to win something. I know that I gave everything a real good go in my career, it’s been a long time and it’ll seem very different from now on not getting up on a Saturday to prepare for a game.”

Yates deserves all the plaudits he gets, a loyal one club man who also cared about his fellow players and everyone connected with Matlock Town Football Club, highly respected by his fellow players and opponents alike. Although he’ll not pulling on the royal blue shirt anymore, the signs are that he will remain with the club in some sort of capacity. As he says, “I’m a Matlock Town fan.”