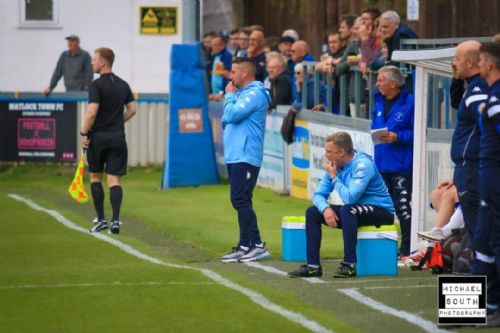 A hat-trick from Jonny Margetts put paid to any hopes Matlock might have had of making progress.

“Firstly we need to apologise to our fans, we’ve had a great crowd in today, and also to the club who treat us and look after us magnificently. We were very very poor and it’s particularly disappointing after going through such a great spell in the league. From minute 1 to 94 ,or whatever, we’ve not turned up. Normally you can have one or two individuals off it but not one player has had a good game today. The players have admitted as much, they’ve let the club down. “

Matlock will have a clear week now to work towards putting Saturday behind them with Tuesday night’s scheduled trip to Stafford Rangers being off due to Stafford facing an FA Cup replay. They are at home to Stalybridge Celtic next weekend.

“One thing’s for sure we’ll be working hard to fix what’s gone wrong today, that performance isn’t in our DNA. Fair play to Belper they wanted it more and that doesn’t sit well with us.”