Home // Latest News // Gladiators partner with 'Her Game Too'

Gladiators partner with 'Her Game Too' 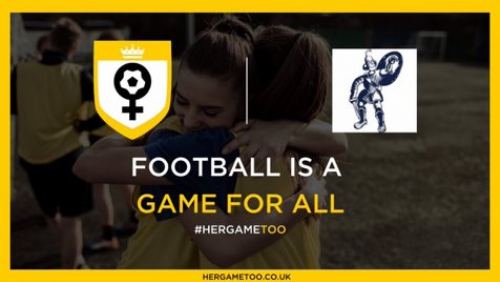 Matlock Town have become official partners with “Her Game Too”, a campaign which began in May 2021 run by female football fans with the aim of raising awareness of sexist abuse in football, right from abuse to spectators through to abuse of players, managers and media.

A number of clubs have officially partnered up with the campaign which has raised money for grassroots football in both the mens and womens game.

Develop a sense of community

Continue to campaign against sexism in football

Continue to campaign against online abuse

Posters (and flyers that will arrive in the near future) will be at the Proctor Cars Stadium in the near future, displayed around the stadium, in the Shorts Lounge and in the toilet areas with information relating to the campaign and how fans can report instances of sexual abuse at matches. In addition, the Her Game Too logo will appear in the Gladiators matchday programme and the #hergametoo hashtag will be promoted on the club’s electronic scoreboard as well as being promoted on the club’s social media channels.

A Her Game Too weekend is planned during the next calendar year where the Gladiators first team would play at home on a Saturday followed by the womens team on the Sunday. Only Exeter City so far have done this as part of their partnership.

Chairman Bryn Apperley says that the Gladiators are delighted to be partners with Her Game Too.

“ Women play an increasingly important role in football and that’s certainly the case here at Matlock . We have a womens side and a number of girls playing in our junior sides. A fair proportion of our staff and helpers are female. It’s also great to see more women coming down to watch the Gladiators and as a club we’re extremely proud to become partners with Her Game Too."

More information about the campaign and what has been achieved to date can be found on the Her Game Too website hergametoo.co.uk