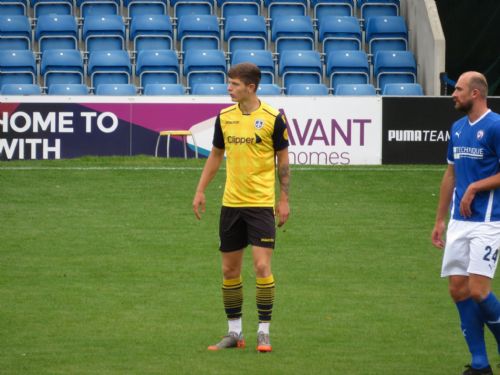 Matlock Town will be welcoming back one of their own with the signing of central defender Ashton Hall, subject to FA and NPL approval.

The Gladiators have fought off other potential suitors to bring Hall back to the Proctor Cars Stadium.

Hall was a leading light in the Gladiators’ academy and reserve sides, being named captain of both before finally breaking through to the first team in 2018/19. He signed a contract with Matlock in October 2018, his performances attracting the attention of a number of EFL clubs, in particular Leeds United and Sheffield United. He joined the Blades in July 2019.

Hall played for the United under 23 team and had a spell on loan at Guiseley last season, actually coming on as a late substitute against Matlock in the F A Cup 3rd Qualifying Round tie at Nethermoor which the Yorkshire side won 2-0.

“He’s a good player, you only have to look at where he’s been. He knows the club, he knows what we’re all about. We play with three centre-halves so he knows he’ll be competing with three other good lads, but he wanted to come back to where he’d been brought up. He’s a great signing for us, a fantastic footballer and it’s great he’s back here as he’s had other good offers.”