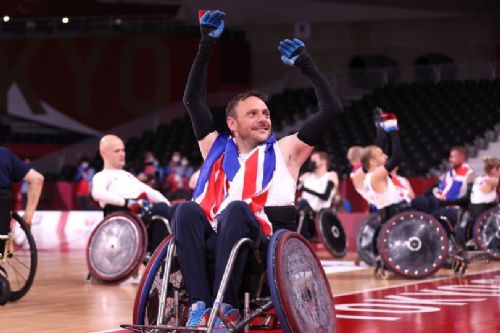 There’ll be a pair of special guests at Matlock Town’s home Pitching In NPL clash with Witton Albion on Tuesday night.

Gladiators fans will be hoping that Great Britain’s Paralympic Rugby gold medalist Ryan Cowling, plus the team’s performance analyst, Jem Akpinar, can use their experience in Tokyo to inspire Matlock to victory.

Cowling lives in Matlock while Akpinar is based in Chesterfiield. The Wheelchair Rugby team beat the USA to win gold to win a first ever Paralympic medal for Great Britain , the first for a European nation and the first gold in a team sport for GB in the games sixty one year history.

Father of two Ryan joined the GB Talent Development Squad on his 40th birthday in 2014, being the team’s captain before his invitation to train with the GB squad in 2015. He had started his first international by the time he was selected for the Rio Test 2016 event. A first placed finish saw him back in Rio later that year for the Paralympics making his debut as part of the GB squad.

Ryan was in the squad which won the European Championship in both 2017 and 2019 in Germany and Denmark, there was a fourth placed finish in the World Championship in Australia during 2018 while two years later GB finished second in the King Power Quad Nations Wheelchair Rugby Tournament in the UK.

A former serviceman. Ryan suffered a spinal injury in 1994, a year after joining the Army.

Matlock Chairman Bryn Apperley is delighted that Ryan and Jem will be in attendance on Tuesday night.

“ It was brilliant to see the GB Wheelchair Rugby team do so well in Tokyo and come home with the gold medal and it’s fantastic that a sportsman from Matlock was involved. Everyone at Matlock Town FC sends their congratulations to Ryan, Jem and the squad on a magnificent achievement and I’m sure our fans and everyone at the game on Tuesday will give Ryan and Jem a tremendous ovation.”