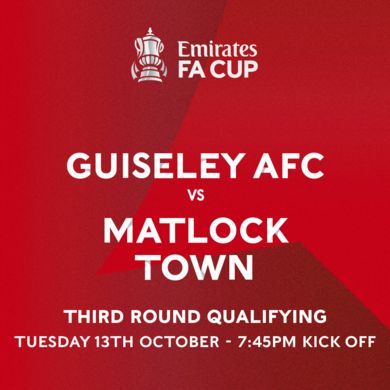 In tribute to the late Jordan Sinnott Guiseley AFC and Matlock Town have announced that Tuesday night’s FA Cup game between the two at Nethermoor Park will be streamed live with a request that anyone watching the game or supporting either club considers making a donation to the Jordan Sinnott Foundation.

The Third Round Qualifying tie in the Emirates FA Cup will be streamed for free on Guiseley AFC’s YouTube channel, which can be found here: https://www.youtube.com/user/OfficialGuiseleyAFC.

Both clubs have agreed that the stream will be free for all to view but ask in return that people donate to the Jordan Sinnott Foundation via the following Just Giving page - https://www.justgiving.com/crowdfunding/lloyd-allinson

Jordan, 25, tragically died last January following an incident in Retford. At the time he was playing for Matlock Town but he has strong connections with Guiseley having been brought up in the town. The former Huddersfield Town Academy captain played for Guiseley Juniors as a youngster. He could often be seen after school playing on the Guiseley pitch having climbed the wall with his brother Tom and the young Hendries and Windasses.

The Jordan Sinnott Foundation was set up by his family and friends to raise money for charities close to their hearts.