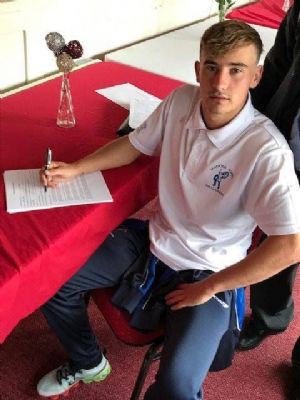 Pacy winger Dan Bramall, one of Matlock Town’s brightest young stars, has signed a contract with the Gladiators.

The news was announced following the 1-1 draw at Ashton United which saw Matlock retain the league leadership. Bramall had crossed for Marcus Marshall to head the visitors’ equaliser and had impressed during the bank holiday games with Stafford Rangers and Gainsborough Trinity.

“He’s a very good player who’s done well for us so it’s important we’ve got him on contract and I’m delighted we have” said boss Steve Kittrick.

Bramall (20) started out with Chesterfield’s academy before moving to Everton who released him during the summer.

“I’m really glad to be here and delighted to sign the contract. Matlock have given me the opportunity to be playing again and I’m really enjoying my football at the moment so signing the contract was a no-brainer” he said.