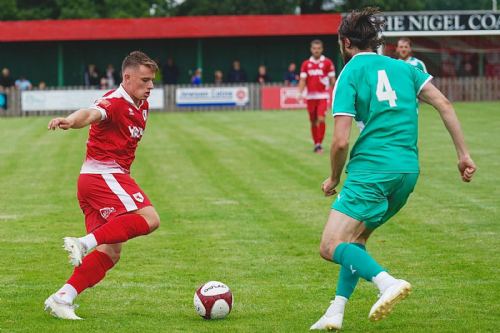 Keighley based Webb-Foster began his career at Bradford City whose academy coach Steve Thornber said he was a natural and prolific finisher. He was one of the youngest ever players to make his senior City debut at the age of 16 years 200 days. Loan spells at Bradford (Park Avenue), Guiseley and Harrogate Town followed before he rejoined Park Avenue on loan in January 2017.

The Bantams released him at the end of the 2017/18 season, signing for Colne shortly afterwards where he scored five goals in six league matches before moving to Lancaster City in October 2018 and returning to Colne in March 2019.

He moved to Ossett United and later featured for Droylsden and Buxton before returning to Colne for a third spell in the summer of 2020.

Gladiators chief Paul Phillips says Webb Foster’s scoring record in the last couple of seasons made his signing “a no-brainer.”

“Last season he scored 16 goals in 32 games and he has 15 in twenty odd this year. I’ve said before I’m not prepared to sit still. I’ve got trust in the lads we have but I don’t feel we’re scoring enough. Reece has goals in him, he’s a box to box player, he wanted to come here, he fits into our wage structure so for me, getting him in was a no- brainer.”

One temporary departure is attacker Jesurun Uchegbulam who is going in the opposite direction on a month’s loan.

Phillips says that it does not necessarily mean the end of Uchegbulam’s stay at the Proctor Cars Stadium, but he pointed out that Uchegbulam needs to focus more on the attributes needed to be successful in football.

“Jez is going out on loan, he’s done okay, in fact he’s got all the skill in the world but at times he’s been unprofessional and inconsistent. He needs to realise that you can’t just turn up on a Saturday and play, it’s the bigger picture relating to his conduct off the pitch and in training. He will hopefully learn from his mistakes and when the month’s up we’ll take a look and see where we are.”

Matlock hope that Webb-Foster, along with Riece Bertram who joined from Belper Town over the weekend can play some part in tonight’s home clash with Grantham Town.