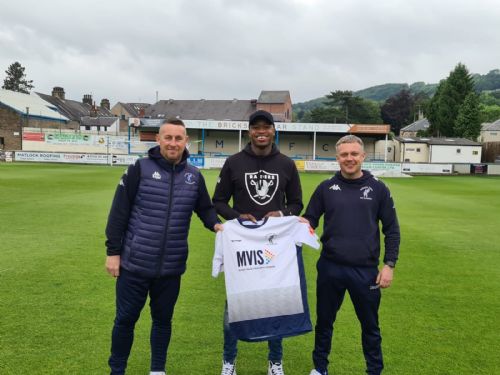 The 27-year-old can operate through the middle or wide and he starts a second spell with the Gladiators.

In 2018/19, he was on loan with Matlock from Boston United and albeit it was for only one game as the Pilgrims recalled him, he certainly made a significant contribution, netting a late winner in a 2-1 home victory against Workington.

Last season however he was on the scoresheet against his new teammates, netting Guiseley’s second goal in their controversial FA Cup win at Nethermoor.

“He’s got pedigree having been in the Conference North for a long time now. He’s a great lad who knows our lads well and can play in numerous positions whether it be as a nine, seven, eleven or ten, he’s 6 ft and can hold the ball up well, we know what we’re getting and it won’t upset the balance of our team, he’s a very very good player.”

Wafula has local ties after being born in Kenya. At the age of ten he moved to England, his family settling in Matlock with Wafula being a pupil at Highfields School. Now based in Alfreton, he can’t wait to get started with the Gladiators.

“I’ve played with the likes of Ryan Qualter and Alex Byrne and having played for Guiseley against Matlock last season, I could see what a good side Matlock looked. If it wasn’t for the early sending off, I reckon Matlock would have won. I enjoyed it when I was here before, there’s some very good players now and I can’t wait to get started. I’ve come here to win games, I want to help Matlock win promotion, I don’t want to play in a struggling side.”

Wafula’s first club was Chesterfield where he played just once in a 3-0 win at Northampton Town in 2012/13. He joined the non league ranks at Worksop Town in 2014 before spending two seasons at Shaw Lane, a year at Gainsborough Trinity, another two at Boston before signing for Guiseley at the beginning of last season.