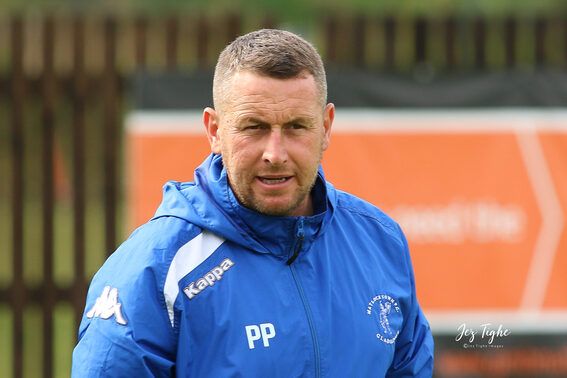 Boss Paul Phillips added midfielder Joe Coveney and defender Kelvin Lugsden to the Gladiators ranks before kick off at Wythenshawe on Saturday and promptly started them as Matlock got their pre season friendly programme off to a good start with a 3-1 win against their North West Counties League First Division South hosts.

Coveney (21), who can also operate in central defence has captained Manchester City under 18’s before signing a two year deal at Nottingham Forest in July 2017 after completing a two year scholarship at the Ethiad and being offered a contract by City. He lifted the U18 Premier League North Trophy in 2016/17. He signed for NPL North West Division Colne following his release from Forest last summer.

Lugsden is vastly experienced at NPL level. Twin brother of former Buxton striker Kieran Lugsden, he was with Ramsbottom United last term but knows a number of the Matlock squad having played at Shaw Lane with Jon Stewart, Spencer Harris, Alex Byrne and Chib Chilaka

“Technically Joe’s a very good player having played at a high level although he's still got a lot of learning to do” said Phillips.

“He’s the type of lad who can play between the lines and open teams up so he’s a different type of player to some we have. He wants to get back into the professional game and hopefully we can help him do that”.

Phillips says that Lugsden’s experience will be invaluable to Matlock this season.

“He’s a good centre half and knows a lot of the lads we’ve already got here. He has a lot of competition to get into the side but with the volume of games we’ll have I think we’ll need defenders like Kelvin who can fit into a changing system. He knows what he’s got to do to get into the team but I don’t think you can ever have enough experience”.

Phillips added that his work on the transfer front is virtually done.

“I don’t think there’ll be much movement now, apart from a goalkeeper as back-up for Jon Stewart although you never know what might become available later on.”

Stewart injured his knee in training on Tuesday and after an examination it was confirmed there is no ligament damage. He should be back in action within the next fortnight.

The 6’5” Preston based striker was signed in June after being with South Shields last term and was seen as “the striker Matlock were looking for” at the time.

But Gonzales has not been at recent training sessions and he did not feature in Matlock’s opening pre-season friendly victory at Wythenshawe Town on Saturday.

“For me all of the players have set standards and Sefton hasn’t lived up to these standards. He’s a contract player who hasn’t fulfilled his obligations to the club. I can’t have it” explained Phillips.

“No player’s bigger than the club. We took a punt on him and it’s blown up in our face, he had a reputation at his previous clubs. We have Liam Hughes and Braulio can play there, maybe it’s not such a bad thing. He’s still our player until someone comes in and takes up his contract or makes it financially viable for us to let them have him.”

Matlock Town got their pre season friendly programme under way thirty six hours behind schedule when they came away from Wythenshawe Town with a 3-1 win on Saturday.

It came after their visit to New Mills on Thursday night was called off six hours before kick-off with Matlock putting a statement on their website that it was due to precautionary measures and that no further comment would be made.

Matlock manager Paul Phillips hastily arranged a private friendly fixture so the night would not be wasted ahead of the Wythenshawe game.

The Matlock manager was impressed by Wythenshawe who ply their trade three levels below Matlock in the North West Counties League First Division South. Had last season not been declared null and void, Wythenshawe would have been promoted had a points per game formula been used in their first season at that level.

“I think Wythenshawe will probably win their league as they have players with experience of higher leagues and others that are well capable of doing so. They gave us a good game as I thought they would. I thought we looked a little leggy, especially towards the end. It was a good pitch but the grass was a bit long as it can be at this time of year. We’d trained hard on Tuesday and then had the Thursday practice match. We tried to get as many lads as possible a good run out as we want lads to get minutes under their belt.”

Alex Byrne, Callum Chippendale and Liam Hughes were on target and although they won the game, Phillips had a mixed review of the afternoon’s events.

“I was disappointed in one or two of our lads but there were also positives to take from the day. It was a good work out and another stage in our build up to the new season. There were no fans there to see it but at least there is some normality back, we’re playing football matches. It’ll be even better when fans are allowed back.”

Matlock will now train on both Tuesday and Thursday before heading off for their second warm up game at Brighouse Town on Saturday. Again, the game must be played behind closed doors.

“We’ve got decisions to make over one or two of the trialists and we’ll do that in the next twenty four to forty eight hours” Phillips continued.

“We’ll be increasing the playing time for players, it’s time to move the bar up a little bit.”