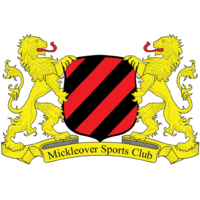 Matlock halted their three-game losing run in style as they finished comfortable winners in the Non-League-Day derby with Mickleover Sports at the Proctor Cars Stadium.

Dan Bramall, back after suspension, got the ball rolling with his 4th-minute strike and although veteran striker Lee Hughes equalised in the 33rd minute, Matlock were back in front by the interval, Luke Hinsley finding the onion bag. Sam Scrivens made the points safe seven minutes into the second half and then there would only be one winner.

Bramall replaced Piteu Crouz, while Spencer Harris, who came on for the injury-stricken Jack Rea in midweek, partnered Luke Dean in a 4-4-2 formation.

Mickleover, whose upturn in form had seen them rise to the second spot, included ex full-time professionals Hughes, Pablo Mills and Stuart Beavon in their starting line-up.

Before the game commenced there was an impeccably observed one minute silence for Matlock’s record appearance maker Mick Fenoughty who died ten days earlier, his brothers Tom and Nick plus other members of the Fenoughty family in attendance to watch a first-class game and a fine Gladiators performance.

Matlock, seventh before kick-off, could not have wished for a better start against second-placed Sports.

Attacking the Town End, Scrivens on the right flank slipped a pass inside for the supporting Dean whose low cross bypassed Marcus Marshall but found BRAMALL in space to have time to slide a low precision finish into the bottom corner.

It might have been double trouble for Mickleover in the 12th minute as Bramall skipped beyond Durrell Berry to hoist in a cross which Hinsley, under pressure from Greg Young, glanced wide. Two minutes later Marshall has an effort blocked following a fine break instigated by Scrivens and Hinsley.

But Mickleover had not climbed to second spot for nothing and are invariably a bogy side for the Gladiators and that view had some credence as they fought back after being outplayed in the opening exchanges.

Jon Stewart made a fine fingertip save to push a Hughes header over the bar in the 26th minute, before four minutes later Mills rattled the crossbar direct from a free-kick, but it would be third time lucky for them in a spell of pressure when HUGHES powered a header past Stewart from Richard Batchelor’s cross from the right.

But a gritty and determined Matlock responded in the best possible way.

Dean’s shot from distance was fingertipped over the bar by Jones who then fielded a low effort from the edge of the box from Dwayne Wiley but a crucial moment came when the Gladiators regained the lead a minute before the break.

Again Scrivens and Dean were involved in the build-up, Scrivens releasing Dean down the inside right channel for Dean to cross low for HINSLEY who shook off Mills to turn and squeeze a low close-range shot under Jones.

Matlock attacked again for Bramall to find the overlapping Ben Gordon whose cross was knocked behind, this coming after Stewart had held a Young effort from a Sports free-kick.

Visiting captain Jake Scott was a touch fortunate not to see a red card for the second successive season at Matlock for an elbow on Josh Lacey as a highly enjoyable first half drew to a close.

After watching the youngsters’ half time penalty shoot-out won by Josh Thompson of Bakerell Town Juniors, it was back to the action with Sports being awarded a free-kick thirty-five yards out which was again taken by Mills with Stewart producing his second fine save of the contest, clawing the strike over the bar.

After Marshall was booked for the Gladiators for a challenge on Young, the hosts turned the screw and Hinsley watched as Jones dropped on his low twenty-five yarder before the goalkeeper was beaten when SCRIVENS got the goal he deserved.

Collecting the ball from Hinsley deep out on the right, he accepted a return backheel from Marshall to cut in and rifle home a fine fifteen-yard finish, which put Matlock virtually in complete control.

Young, Derry and Batchelor joined the cautions count as Matlock treated the highly impressive 729 crowd to some champagne stuff.

Bramall scampered away on the left, his short cross being stepped over by Dean for Marshall’s measured shot to curl narrowly wide of the far post. Then from another Bramall break, Hinsley hooked off target before Young was forced to head behind a Marshall centre, destined for the unmarked Hinsley.

Further goals might have come from Scrivens who had a fine strike kept out by Jones and Harris who drove tamely at the Sports custodian after substitute Crouz and Gordon had linked nicely down the left.

All in all it was Matlock’s best performance at home of the season.

“It was without any shadow of a doubt,” said manager Steve Kittrick afterwards. “I keep saying it, the first and last ten minutes of each half can win you games, look when we scored today.”

Sports boss John McGrath accepted that his side had been well beaten in the end.

“We lost to a better Matlock Town team, we weren’t at the races but wasn’t it fantastic to see a bumper crowd here on Non-League Day?”

That question does not need an answer and many of Matlock’s highest gate of the season will surely be tempted to come back after the first class entertainment on show on Saturday.