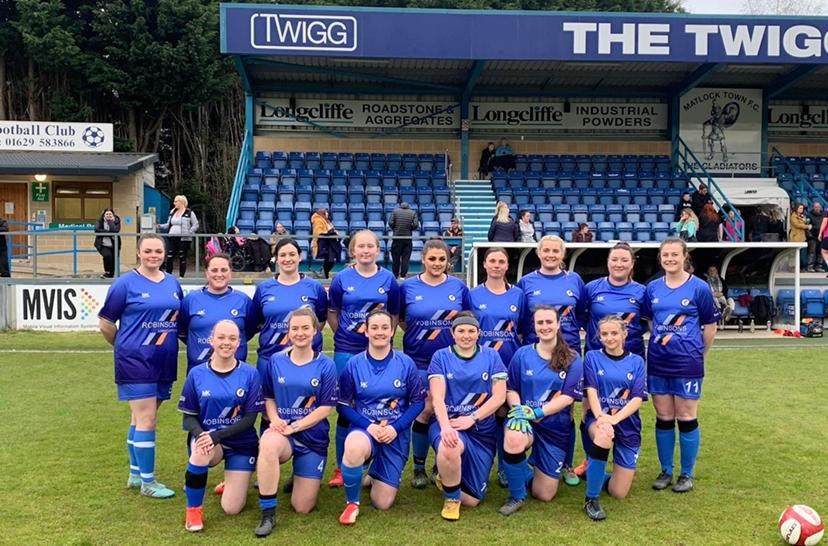 This is seen as a major move with both the Northern Premier League mens’ side and the Ladies operating from the same venue with Chairman Jay Beaumont wanting to further the ethos of Matlock Town being a community club.

The Gladiators will be offering season ticket holders free admission to all ladies home matches and to this end, the early bird discounted rate for season tickets has been extended by a further week to midnight on Sunday 7 August.

Admission for non season ticket holders will be by a minimum donation suggested at £2 for adults, with concessions and children being able to watch the games for free.

“All revenue from the games will go to further develop womens and girls football in the local area” said Mr Beaumont,

“Talking of girls football, Matlock Town Juniors have been offering girls only coaching for the past twelve months and are really excited for the season to start as we have three new teams entering the Derwent Valley League at under 9’s, under 11’s and under 13’s, their home games being played on Cavendish Fields on Sunday mornings. We’ve got over 50 girls training with us on a regular basis and we’ll be adding more teams when they’re ready so if you have a daughter aged 5 or over who’d like to get involved then you can contact Sheree White on 07969 115138 or by e mail matlocktjgirls@gmail.com. The ladies team are also open to new players joining up and again, Sheree is the contact.”

Jay believes that this is a major step forward for the Gladiators.

“The success of the England Lionesses has done wonders for football in this country and in particular the womens’ game and the whole nation should be immensely proud of their achievements. We see the ladies as an integral part of our wonderful club and it’s clear to see the interest in our ladies team when they’ve played occasional matches at the Proctor Cars Stadium. This will most certainly grow following the Lionesses’ being victorious in the Euros and now with having our great stadium to call home. This, along with the development of the new juniors girls teams is possibly the most exciting development in local football for many years and I personally look forward to seeing it develop.”

Katie Twigg, Matlock Town Ladies Assistant Manager is equally buoyant and says she cannot wait for the season to start.

“”This is a massive time to be a part of womens football and having the backing from a fantastic club like Matlock Town is amazing, we all can’t wait to finally call the Proctor Cars Stadium home, to have our home games played there this season, for the women who have been a part of the team since the start and for the girls who are just starting their football journey. . It’s all such a great achievement and it shows just how far the womens’ game has come. Things can only get better from here! We hope to see as many people down at the Proctor Cars Stadium showing their support for both the mens and womens teams.”

The Ladies first outing at the Proctor Cars Stadium is scheduled for Sunday September 18 against Shirebrook Rangers in the Derby Girls and Ladies League—kick off 1.30 pm.