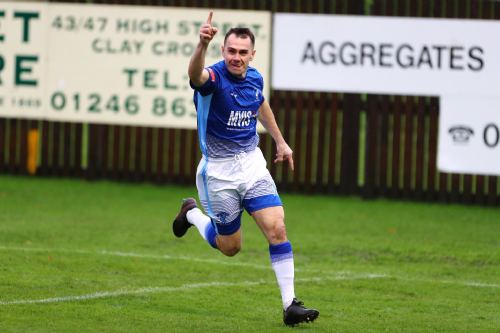 Midfielder Liam King has announced his retirement from the semi-pro game.

King returned to Matlock Town for a second spell last October but a recurring back injury has been key in the 34 year old’s decision.

King originally arrived at Matlock at the start of the 2007/08 season after being released by Rotherham United and quickly endeared himself to the Gladiators fans with some impressive and industrious performances in the engine room.

He left to join North Ferriby United during the summer of 2012, and as captain he led them to the NPL Premier Division title in his first season with the Villagers. He then led Ferriby to an epic FA Trophy Final victory against highly fancied Wrexham in 2015 before in the following season they won the National League North play off final to earn their place at the top table of the non league game.

He was then named captain when he switched to FC Halifax Town at the start of the 2016/17 season and was in the team beaten by Matlock in the FA Trophy in November 2016. King moved to Gainsborough Trinity for an undisclosed fee during November 2017 and in February 2019 his contract was cancelled due to injury problems but along with brother in law and current Gladiators striker Ross Hannah, he took over as caretaker manager at Trinity. The caretaker status was substituted for permanent and lasted until October 2019 when Curtis Woodhouse took over with King staying on as a coach.

After spells with Newark and Frickley King came back to Matlock and in total he has made 214 appearances scoring 25 goals.

“I’ll be playing local with my mates from now on if my back can stand it. Matlock’s a great club and I’ve enjoyed every minute of my two spells there, I’d like to thank everyone at the club including the fans for their great support and will be down to cheer the lads on” said King.

“What a player, what a lad, absolutely superb. His back hasn’t helped him and he says he can’t do what he wants to but will sign on if we’re short but he can’t train week in, week out. Any youngster who wants to learn the game and understand the commitment that goes into playing at this level should have a chat with Liam as he’s a model player and will learn a hell of a lot.”