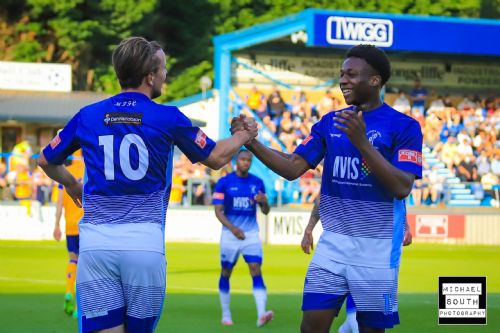 Callum Chippendale struck the decisive goal after 14 minutes to maintain the Gladiators 100 per cent record in their warm up matches.

Mansfield, who had won 9-1 in their opening friendly at Retford United on Tuesday, never even remotely looked like repeating it and it is testament to the whole Matlock side who defended solidly to avoid either of their two goalkeepers used on the night being exposed. Then at the other end it was Matlock who created the clearer opportunities.

“All in all it was a very good night for the football club” said Phillips.

“It’s a big thank you to Nigel (Clough) and Mansfield for bringing a strong side over, there was a good crowd in. On the pitch I thought we showed what we’re all about, we had good shape and looked hard to beat. We also had the better chances.”

For Chippendale , it was his first start after injury and he played the opening forty five minutes.

“Chippy’s come through it ok so that’s another bonus. It was unfortunate we lost Alex Wiles early ion but Declan Walker’s come on and been outstanding alongside Mark Lees who again had a magnificent game. When you’re under the cosh these kinds of players are worth their weight in gold breaking things up and keeping the pressure off the defenders.”

Matlock are next in action on Wednesday night when Chesterfield visit the Proctor Cars Stadium.