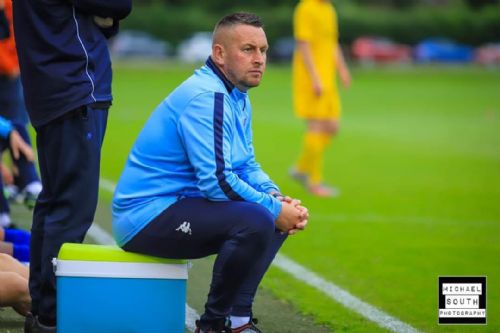 Matlock Town have shown their faith in manager Paul Phillips and his assistant Dave Wild by putting them on contract.

Phillips and Wild joined the club in January 2020 following the exit of Steve Kittrick from the managerial hot seat.

It is the first time the Gladiators have placed a manager on contract since Imre Varadi was in charge for a year back in the mid 1990’s.

Matlock Chairman Bryn Apperley says Phillips, together with Wild, is doing a fantastic job .The seeds of recovery were firmly sown in an encouraging start to the curtailed 2020/21 campaign as the Gladiators were challenging for promotion, albeit having played only six matches. If final standings had been decided on a points per game basis, Matlock would have been in second spot.

“I’m absolutely delighted Paul and Dave are on contract with us for they’re doing a tremendous job and have really become firmly integrated in what we’re trying to achieve here at Matlock Town. They’re workaholics and they’ve assembled a group of players who are showing a winning mentality and the desire to do the club proud. So it’s fabulous news and they fully deserve our backing and the belief we have in them.”

Phillips is equally pleased with the move which he says gives the club stability and continuity.

“We’ve got a lot of lads tied to the club and the contract shows the club have faith in what we’re doing, it ensures we have continuity and stability. Now it is up to Dave and myself to repay the club for that faith and belief and I can assure everyone we’ll be working damned hard to bring success to the football club. It’s very humbling to be honest but I feel we’re all going in the right

direction. The aim now is to be in the mix for promotion, the club has been in the lower reaches of the table for far too long for a club of this stature. I want people to be proud of us on the pitch just as they are with what’s happening off it.”