Home // Latest News // One in and one out as Gladiators freshen up squad.

One in and one out as Gladiators freshen up squad. 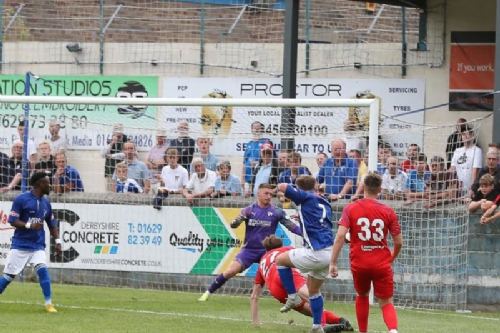 Goalkeeper Dan Wallis is back at Matlock for a second spell just under two years after he departed for Gainsborough Trinity.

Wallis (22) signed on the dotted line and hopes to make his second debut for the Gladiators at Stalybridge on Saturday, subject to NPL and FA approval.

The former Sheffield Wednesday Academy custodian was released by the Owls in the summer of 2019 and played against the Gladiators in a pre season game for Chesterfield shortly afterwards .In a four year term with Wednesday he played for both their under 18 and under 23 teams , being part of the successful Professional Development League Two North and National Title side that finished top in 2016/17.

Before his release from Hillsborough, Wallis enjoyed a short loan spell at Frickley .

He came to the Proctor Cars Stadium in November 2019 following a suspension received by Jon Stewart, making his debut in a 2-0 home FA Trophy victory over Redditch United. His penalty saves in an epic replay win later in the competition saw them progress further as they overcame Chorley at Victory Park, the Magpies then being in the National League.

Stewart was recalled after his suspension came to an end and Wallis signed for Gainsborough and has more recently been at Stamford in the NPL Midlands Division.

With their regular first choice number one Shaun Rowley sidelined with a broken finger, Matlock turned to his deputy Paul Cooper but Gladiators boss Paul Phillips has gone for the more experienced Wallis.

“No disrespect to Coops it was probably too much too soon for him at this level, I have no doubts he’ll be a top goalkeeper in time. I’d had my eye on Dan for a while, he’s done really well at Stamford, he’s commanding and speaks well behind the back line and I just felt we needed to get someone in used to playing at this level.”

There could even be another addition to the squad before the Stalybridge game, but leaving the Proctor Cars Stadium is Craig King .

King initially departed for Frickley Athletic during the summer but returned to the Gladiators less than three weeks later. However his game time has been limited and that is the reason behind the move away from Matlock.

“Craig’s a great player, he knows there’ll always be welcome here at Matlock but understandably the lad wants to play, it’s unfortunate for him that it hasn’t worked out for him so far this season. He’s a smashing lad, a very good player and we wish him all the best for the future” Phillips added.