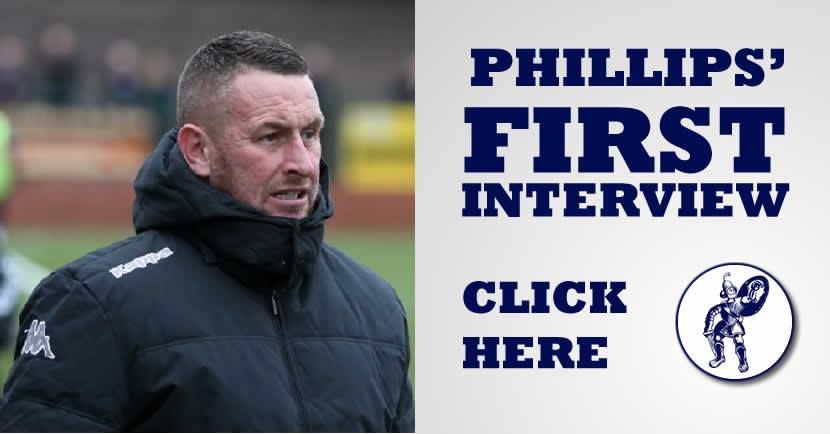 New Matlock Town boss Paul Phillips says the club’s history, good support and the players they have now and have attracted over the years were factors in him applying for the vacant manager’s job following Steve Kittrick’s departure earlier this week.

The Stockport based 41 year old has been in the opposition dug out for the likes of Ashton United, and Buxton against the Gladiators in recent seasons and is looking forward to engineering an upturn in Matlock’s league fortunes, with the Gladiators currently in an uncomfortable 19th spot in the BetVictor NPL Premier Division.

“Matlock’s a big club with great tradition, it has great support and has some good players. I remember when Mark Atkins was in charge and Danny Holland was here. Having been to Matlock with rival clubs, we’ve always been treated fairly and had good games against them. They remind me very much of Ashton United where I had some really good years and I’m coming here to hopefully do the club proud.”

So what can Matlock fans expect in the Phillips era?

“If you look at where I’ve been before I like my teams to be hard working, to be professional both on and off the pitch and with this in mind, we’ve got to find a way of winning football games. Obviously I’ve got the job through Steve Kittrick’s misfortune, but I’m hoping I can bring a bit of freshness and youthful experience. At the end of the day though it’s about working hard, that’s the be all and end all, my ethos is that if you work hard then you have a better chance of getting some reward. That was the case at both Ashton and Buxton.”

Phillips left Buxton earlier this season and he says having managed Matlock’s local rivals is no problem to him as he begins a new chapter in his managerial career.

“It may bother some people on social media and I know we would have turned it around there. But that’s in the past and what I will say is that I will never shirk my responsibilities. I’ll be open and available to talk with the fans for after all, they’re the people that help pay our wages. Win, lose or draw, I’ll be there in the bar afterwards to meet fans and answer any questions they may have.”

Phillips says he will go into the job with “ a blank piece of paper”, hence he will watch Matlock’s game from the stands at Mickleover tomorrow.

“Steve (Shuttleworth) will run the team tomorrow, it means I can take a look at what we have and then give my input afterwards as to what we may need. I like to have clean sheets, that’s what gives you the best chance of winning football matches but I also like pacy wingers and we have them at the club at the moment. It’s a matter of finding a way to win, if we can do it

playing the right way that’s even better, but if we have to play ugly then we will as we ned to get up that table.”