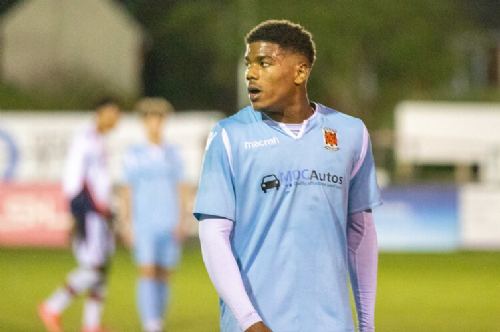 After bringing in goalkeeper Dan Wallis earlier this week, Matlock boss Paul Phillips has added another signing with all round midfielder Nathan Okome joining the Gladiators on loan from National League North Chorley.

The 20 year old, who can also operate as a central defender, joined the Magpies during the summer after playing at 1874 Northwich and Hanley Town in the North-Western Counties League. He started his senior non-league career with Knutsford, this coming after being at both Manchester United and Crewe Alexandra as a youngster. He has also been training with Barnsley under 23’s while studying in Sheffield.

Okome’s manager at Chorley, Jamie Vermiglio says on the club’s website that he is “strong, athletic has good football intelligence and has shown a willingness to work very hard.”

Phillips says Okome will add competition for places during the busy festive period.

“With Craig King leaving and Liam Hughes suspended plus if we pick up any injuries, it’s important we keep the numbers up in the squad. Add to that he’s a very good player who we feel can fit into the way we want to work, we’re delighted to have Nathan on board.”