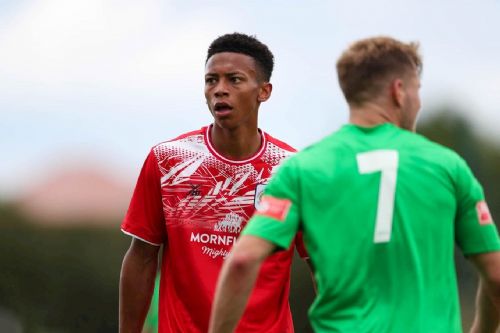 Matlock Town is pleased to announce the loan signing of twenty-year-old striker Tyreece Onyeka from Sky Bet League One side Crewe Alexandra.

Tyreece is an exciting young forward who can play anywhere across the front. He possesses an electric pace and can beat a man with ease.

He is an academy graduate, who was handed his first professional contract in the summer of 2020 after impressing throughout the youth team setup.

He impressed early on in pre-season before his injury and the Gladiators gaffer wasted no time when the exciting young forward was made available to loan.

Manager Paul Phillips said the following "Ty is a player we watched and may have tried to get earlier in the season but he picked up an injury that halted his progress. He's a fast and direct natural goal scorer who with playing off Liam, I think will be a real handful and we send our thanks to Crewe and their manager David Artell for sanctioning the move."

Tyreece along with Liam King & Aram Soleman will all be available for tomorrow's Pitching In NPL home fixture against FC United Of Manchester.