Phillips beats out plethora of clubs to Opoku signing 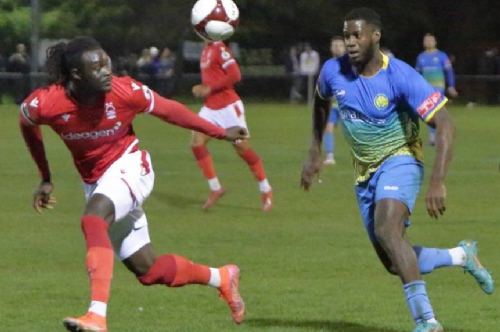 Matlock boss Paul Phillips has begun his work in the summer transfer market early and Matlock fans will be delighted with the news that striker Aaron Opoku has joined the Gladiators from Carlton Town.

Opoku (26) has been with Carlton for four years now and has built a reputation of being quick and aggressive with an eye for goal. In 38 appearances for the Millers last term, Okopu found the net fourteen times finishing as the club’s joint leading scorer alongside Nathan Watson.

Opoku is moving from Nottingham to the Manchester area and former Matlock striker Darryl Thomas, now on the coaching staff at Carlton, has advised Opoku that a move to Matlock would be beneficial for him at this stage of his career.

Phillips has had Opoku on his radar for some time and moved quickly when he found out that Opoku would be leaving Stoke Lane to head to Manchester.

“We’ve watched him and he’s big, strong, quick and powerful with bags of goals in him” said Phillips.

“He’s been a good servant to Carlton in the league below but he’s moving to Manchester and it’s too good an opportunity to miss for we need to add goals to our squad. Darryl Thomas speaks very highly of him and very highly of Matlock. We’re delighted to bring him to the club.”

The move is subject to approval by the FA and the NPL.

Phillips is busy looking to add further to the striking department and other positions in readiness for the new NPL season which begins on Saturday 13 August.