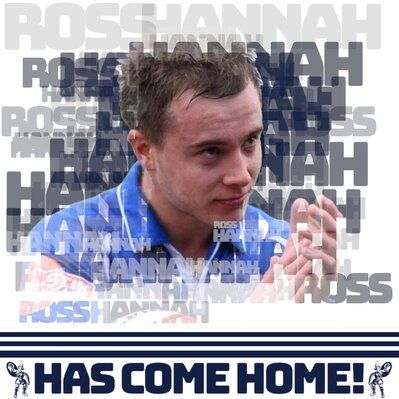 Subject to approval from the Northern Premier League and the FA, striker Ross Hannah has made a surprise return to Matlock Town a little under ten years since he accepted an offer from Bradford City to pursue a career in the Football League.

He is back at the Proctor Cars Stadium, having made the move from Cleethorpes Town.

34 years old Hannah broke Matlock’s goalscoring record in 2010/11, smashing in 52 goals to surpass the 49 scored by Bobby Mountain in 1982/83. In all he netted 90 goals between 2009 and 2011, having joined Matlock from Derbyshire rivals Belper Town. He twice won the NPL Golden Boot award and in 2010/11 the Non-League Golden Boot, his obvious popularity with the fans being marked by being named as the fans player of the year in each of his three seasons with the Gladiators.

He was with both Sheffield United and Sheffield Wednesday as a youngster, also serving Worksop Town, Gainsborough Trinity, Stocksbridge Park Steels and Hednesford Town in his early non-league days.

Hannah made 19 appearances, scoring three goals for Bradford between 2011 and 2013 in which tim he had loan spells at FC Halifax Town and Grimsby Town before he moved to Grimsby on a permanent basis netting nineteen times in 69 games to add to the nine goals in fourteen appearances in his loan spell.

There then followed spells at Chester and Barrow and a loan spell at Southport before he returned to the NPL joining Gainsborough Trinity at the start of the 2018/19 campaign. In March 2019 along with his brother in law Liam King he became a caretaker manager at Trinity, their roles becoming permanent at the end of the season. But in October 2019, Curtis Woodhouse took over the managerial reins and after a loan spell at Cleethorpes, Hannah made the move permanent in July 2020.

Matlock boss Paul Phillips revealed Hannah had been a summer target and he was delighted to have got the deal over the line.

“I’ve always had great admiration for Ross, he’s a top,top striker. I spoke to him during the summer but at the time the move didn’t seem right for him. He’s got one of the best goalscoring records in non league football. After talking with him I realised he still had the hunger and the desire to score goals and be successful, in fact he blew me away with what he wants to achieve and he can’t wait to come back and contribute to what we want to do at the football club. He’s still as fit as a fiddle, a very clever player so for me, it was a no brainer.”

Phillips also paid tribute to Cleethorpes for their part in the deal being brought to a swift conclusion.

“Cleethorpes Town have been first class and I’d like to thank their management team and officials for everything they’ve done to make Ross’ move to us a smooth one. They’ve all been fantastic” Phillips added.

Hannah himself could not hide his excitement on returning to Matlock where he had his most productive scoring period.

“I’m really happy to have the opportunity to come back to Matlock where I enjoyed a good spell before my move into the pro game. As soon as I spoke to the gaffer it felt right, I was really impressed with what he had to say and his ambitions. Matlock was a great club for me and I thoroughly enjoyed my time there. Obviously it’s been a while and it will be good to see some old faces again. It feels the right move for me for so many reasons. I always felt I’d come back but you never know in football, it can take you in all sorts of directions but I’m so glad the opportunity has come around I can’t wait to get going, I’m sure everyone else is the same. Hopefully I can continue from where I left off all those years ago but probably won’t get the 52 goals I finished with, not this season anyway!”.

Hannah says he is confident that the Gladiators will be a force to be reckoned with when they can return to action after the Covid 19 interruption.

“Looking at the lads already signed and the start they’ve made,I can’t see why we can’t have a serious challenge to get promoted once we can safely resume.”