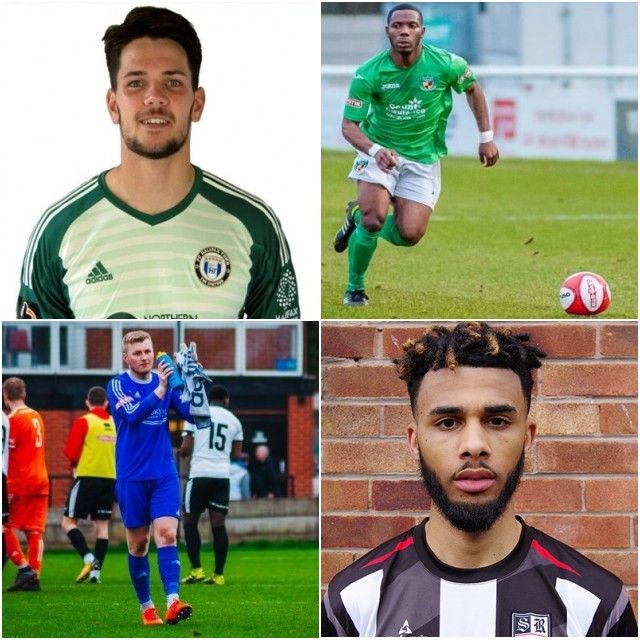 Matlock Town boss Paul Phillips has made four more signings to make it five for the week ahead of Saturday afternoon’s FA Cup Preliminary Round clash with OJM Black Country Rangers at the Proctor Cars Stadium.

Phillips had added midfielder Daniel Greenfield on loan from Gateshead over the weekend and in midweek he has brought in goalkeepers Kyle Trenerry and Shaun Rowley, winger Osebi Abadaki and striker Andre Johnson.

Trenerry (21), once with FC Halifax Town, was between the sticks in the Gladiators’ last competitive match before the 2019/20 season came to an abrupt end due to the Covid 19 pandemic in March when Matlock were narrowly beaten 3-2 at Warrington Town, his third appearance for the club. Trenerry, who has an NPL Premier Division Champions medal while with Farsley Celtic in 2018/19 had spent the pre season on trial at Scarborough Athletic.

Rowley began his career at Shrewsbury Town and had been on loan at Watford, Halesowen Town, Chorley and Tamworth before joining FC Halifax Town on a free transfer in July 2018. A move to Solihull Moors followed in August 2019 before he spent last season with Kettering Town. The 23 year old stands at 6'2” and was impressive as a trialist in the Gladiators 1-0 win at Tamworth last weekend.

Phillips says it was vital he brought in two good goalkeepers in the absence of the injured Jon Stewart.

“Goalkeeper is obviously a very important position and Jon’s going to be out for a while. We have the FA Cup game on Saturday and a lot of weeks playing Saturday/Tuesday/Saturday so we can’t be without a recognised goalkeeper for that length of time. Both Kyle and Shaun are good goalkeepers, both have been looking for a club and it’s our good luck that we have two good goalkeepers fighting for the shirt. I’ve got to pick the best one, it’s not only important we have a good number one bit a reliable number one also.”

29 years old Nigerian Abadaki has spent the pre season at Buxton along with brother Godwin but has featured in Matlock’s friendly games at Trafford and Tamworth. A pacy left winger, he began his career at Blackburn Rovers and has extensive non league experience with Shaw Lane, Stafford Rangers, Hyde United, Stalybridge Celtic, Mossley, Ashton United, FC Halifax Town and Salford City before being at Hednesford Town last season.

“I’ve worked with Osebi before at Ashton, he’s strong, direct and quick, player of the year last year at Hednesford, he created our goal down at Tamworth and that directness he’s got is probably something we’ve been lacking” Phillips explained.

Johnson (24) joins Matlock for a second time, previously being with the Gladiators for a short spell during the 2014/15 campaign under manager Dave Rushbury who signed the former Derby County youngster from Worksop Town. Since then he has had National League North experience at. Bradford( Park Avenue), Alfreton Town and Boston United and in December 2017 scored Alfreton’s winner in a 1-0 Derbyshire Senior Cup victory over Matlock.

“Andre’s quick and can open games up” said Phillips. “I saw him a few times last year, I gather he’s been here before but was quite young then and had made quite a jump up the leagues. We need someone who can play on the last man so it was a necessity we got him in.”

All four new recruits have been signed in time to be included in the Matlock’ squad for Saturday.