Sargent Signs On Loan From Salford 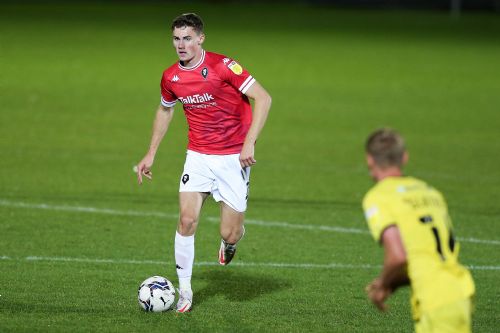 Sargent joined the Ammies from Wrexham in the summer of 2020 after being at The Racecourse since he moved back over the Welsh border from Accrington Stanley at the age of twelve. He began his senior career at Wrexham in 2018 having a loan spell at Airbus UK Broughton but representing Wales at youth level.

On joining Salford he was sent out on loan to Widnes to gain more first team experience, his first team debut for Salford coming in an EFL Trophy tie versus Leicester City U21’s in December 2020.

Phillips says that the Gladiators have a very, very good player” in their ranks in Sargent.

“I tried to bring him in a few weeks ago but Salford wanted him to play in their first team in the EFL Trophy games. Having watched him quite a few times he’s perfect for what we want.”

“Matt fills the void and it takes the pressure off Alex Wiles. Matt’s a very, very good player, a number eight who can also fit in where Mark Lees is, something we’ve missed since Dec Walker left. I’m delighted he’s with us.”

Sargent will be included in the Gladiators’ squad for tomorrow’s trip to Atherton Colleries where Matlock will be looking for a fifth straight win and a fourth successive clean sheet.

Phillips and Matlock received another boost with the news that giant loan striker Jerome Greaves is fit again after a hamstring injury and he too, will be available for tomorrow’s game.