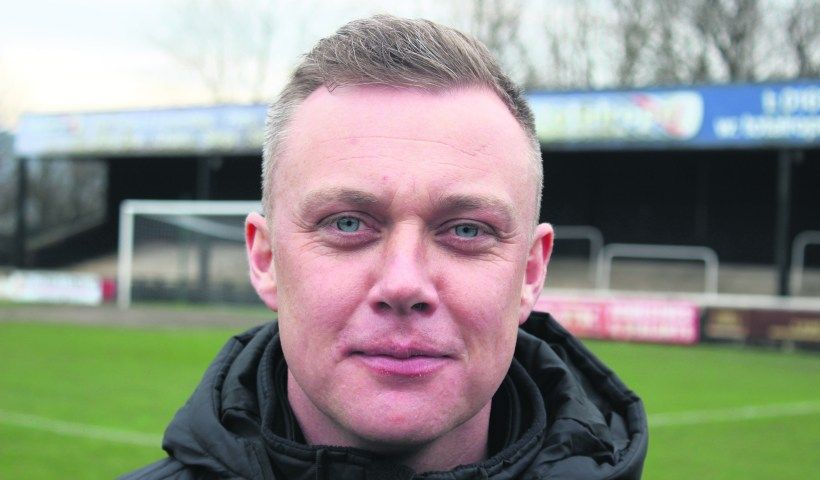 I (Matthew Rhodes) had a quick chat with Matlock Town’s joint assistant manager Dave Wild recently to find out more about the fundraising that the club’s management staff have planned and what’s currently happening with the team.

Can you just give a breakdown as to what yourself and the other management staff at Matlock Town have planned to raise funds and where exactly these funds will go to as well as the club itself?

“We’ve obviously watched the £15,000 that’s been raised from the club and that’s just gone from positive to positive in the last month or so. We just wanted to do our own bit too. We want to focus on the community aspect of the club as well as generating revenue for the club to bring it forwards. We want to thank the NHS and all the key workers due to what’s going on in the world so we want to give a percentage of the funds to them and we’ve decided to give some of the money raised to one of the local hospices in Matlock and to the main NHS channels within Matlock as a sort of thank you to the community from the club.”

“Me and the staff are going to collectively cycle 1,407 kilometres which is the distance from John O’Groats to Lands End. We decided in the management group chat to go for cycling as we can’t all run! Obviously, we can’t cycle any actual routes together so we’ll just be, across the month of May, keeping people updated by uploading photos of us, letting people know where we’re at and hopefully people will get behind it.”

Whose idea was it to get all the management staff directly involved with fundraising too?

“It was myself, I just threw it out there in the group chat. We’ve all been discussing what we can do to help the club where we can but also to help out local NHS staff too. I don’t think there’s a better way of doing this to help out the local area. It was a team thing to get this all together really. What we’d like to do is to hopefully do the final bit actually in Matlock and ending at the ground. Obviously that’s dependent on what’s happening with social distancing then around the end of May but that would be a nice way to end it.”

Can you explain why fundraising is vital for non-league teams at Matlock Town’s level to be doing right now and what particular areas of the club itself that this will really ease pressure on?

“At the end of the day, teams are going to struggle with loss of revenue due to no gate receipts. What I think some people don’t appreciate is the volume of games that we had coming up at home. That has really affected us. We couldn’t have the FC United game. Everybody knows that game generates a lot of money for every team in the league because of ticket receipts and bar expenses and so on. Not only is there that but there’s also drinks that now don’t get sold, programmes printed that now don’t get sold, merchandise that doesn’t get sold that the club then takes a hit on. Across the league as well, you’ve got a volume of players who are contracted to clubs – they’ve still got to be paid, that money’s got to be found. On top of that, there’s things like improvements to the stadium. Something that’s become very alarming and very apparent is how little the Premier League actually care about what’s going on beneath them. I’m not saying that about the FA, I’m saying that about the Premier League as a business because they could subsidise the whole pyramid to keep us alive for three or four years. I saw an interview with Gary Neville the other day and he hit the absolute nail on the head with what he was saying regarding financing lower down. There’s so many things that some people won’t be aware of – clubs will stay have to pay rent for the pitch for example.”

When you see the amounts raised, not just by Matlock Town, but by other teams in and around the Northern Premier Division, does that show just how important non-league football is to local communities across the country?

“Absolutely. Especially for a club like Matlock and for a club like Mossley where I joined from – they’re community teams and they’re community-driven. Clubs like these will need help and that’s what the communities have done for them. These donations have come from people who really care about the club. Some of the comments you see on the JustGiving page from ex-players and players’ parents, people who have been looked after by the club – that’s what non-league is about. What has to come first for the club is that people from the area are coming to support their local football club and have a team to be proud of, a team that all works hard for each other, a team that will be there for the fans and the fans will be there for the team through thick and thin. A team that wears the badge for the town, not to pick up a wage. If you’re playing for Matlock next season, you’ll be there on merit, you’re going to be working hard and they’ll be there to make a great club successful.”

How are the players in the squad getting on and how is training being monitored?

“Everyone on the management staff are very aware that there could be a hell of a long period without any football. We don’t want to come back into a pre-season where we think we’re miles behind here because this next season, I am telling everyone now, is going to be a positive season. Whether that results in promotion or the best league finish that the club’s had for some time – I can assure you, that’s going to happen.”

“We’ve put together an off-season programme so we’re tracking and monitoring and speaking to a lot of the players. We’re having a look at rebuilding the squad, we’re planning on a few new faces. We’re going to bring in new faces who will play for the badge, who will give everything for their teammates. We’re going to bring in an attractive style of play. I can’t name names as to who we’re looking at and who’s on the horizon but these are players that are going to make people sit up and think, ‘yeah, these lot have got a side together.’”

“This will be a much stronger team. We will not be in a relegation scrap next season. The community just need to keep getting behind us and I’m prepared to put my neck on the line – this will be a positive, fun and enjoyable Matlock season. There will be smiles on faces and attendances will go up because we’re in it together and we’re all chomping at the bit to get started. We will wake up the sleeping beast that is Matlock Town. We’ll be the ones to get it going.”