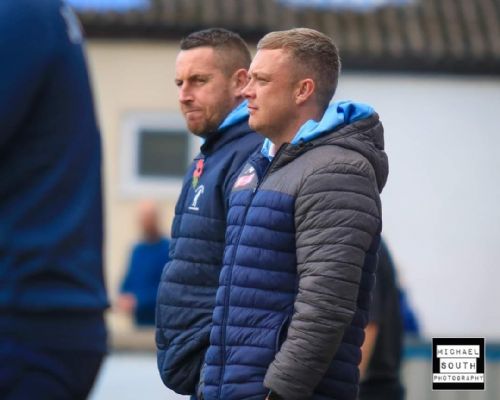 Paul Phillips wants Matlock Town “to get back on the horse” after their title push was derailed a little by Saturday’s 3-2 home defeat to Whitby Town.

The Gladiators chief was initially scathing in his post match interviews calling his side’s display as “rubbish” and “gutless” and ideally he would have liked Matlock to have had a fixture on Tuesday night in a quick attempt to put last weekend’s result behind them.

But the break between league matches is a fortnight with the Gladiators in FA Trophy action on Saturday at Rushall Olympic.

“Saturday was a bad day at the office and we need to put it to bed. We conceded three goals due to individual mistakes. Now it’s a matter of working hard in our two training sessions this week so we can hopefully get back on the horse in the FA Trophy game at Rushall. Nobody will be hurting anymore than the lads themselves after Saturday.”

With Buxton in the FA Cup and South Shields dropping two points in a 1-1 draw at Atherton, Matlock wasted an opportunity to strengthen their position at the top of the table. Now with Buxton and Shields both out of the FA Trophy, they have the chance to make up ground on Matlock and Buxton gained an expected 2-0 home win over Atherton on Tuesday night to cut their deficit on the Gladiators to four points having played three fewer games.

“It’s always a missed opportunity when you drop points and given what happened on Saturday a win would have been great for us. But before the season started I’d got a target in my mind of forty points from twenty games, if we win our next two we’ll be on forty five. So I’m not going to start beating the lads up, we just need to refresh one or two things. These lads have got us to where we are, we let ourselves down on Saturday and now it’s time to put things right.”

The Whitby game attracted a healthy 753 crowd and apart from the victory over FC United of Manchester which was watched by 903 fans, the Gladiators have struggled to find their true form in front of a big crowd, the FA Cup defeat to Belper (1052) and the 1-0 loss to South Shields (1364) being cases in point.

“It’s a shame and I’d like to thank every one of them for their support” added Phillips.

“Now we’ve got a couple of Saturdays on the road and now we must strive to get positive results away from home and hope we can attract them back for the next game at Matlock. We feel we’ve let people down and that’s always a frustration but no matter what people say, we’re top of the league, individual mistakes cost us. We had a go at the end and when you look at it, had Shaun (Rowley) not made that mistake, we’d have got a draw.”

So the theme from Phillips is for Matlock to take care of themselves.

“I’d rather have the points on the board than the games in hand. Buxton’s got the FA Cup to digest which could hopefully distract them. First and foremost though we take care of our own business.”

That immediate business is on the 4G surface at Rushall who are currently in fourth spot in the Southern League Premier Central, their 1-0 defeat at Banbury United on Tuesday bringing an end to a winning streak at the seventh time of asking.

“It’ll be a tough test, you expect that when you visit Birmingham area sides. It’s a game we’ll be wanting to win, not only to put last Saturday behind us but we’ve got a realistic chance of going a long way in a cup competition open to only non league clubs. It’s all about momentum, a win would give us some going into the Morpeth away game next week.”

Matlock will be checking on Callum Chippendale’s fitness ahead of the clash, Chippendale sitting out the Whitby game as did club captain Liam Hughes through suspension. Hughes though will be back in the squad but Jordan Cooke is out as Halifax do not want him cup tied.

Phillips also revealed that Matlock might be adding a forward to the ranks before the weekend.

Meanwhile Salford City have allowed midfielder Matt Sargent to extend his loan stay at the Proctor Cars Stadium and Phillips has signed his son, full back Finlay, from New Mills. He was an unused substitute against Whitby,

“This isn’t a signing done on sentiment, he wouldn’t be here if I didn’t think he was capable” said the Town boss.