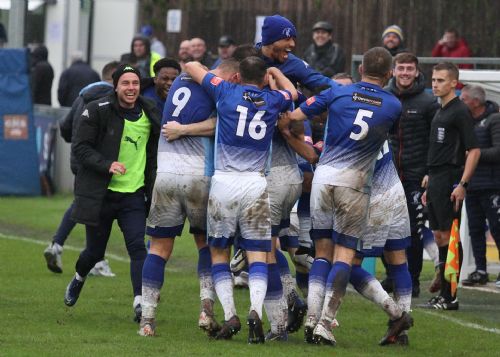 Matlock Town retained the leadership of the NPL Premier Division in spite of a frustrating start to 2022.

A third successive win in the league came their way at Hyde United on Tuesday night, the Gladiators winning 3-2, but it was their first match in fifteen days since their local derby home win over Buxton on December 27.

Since then Covid 19 in the Gainsborough Trinity camp led to the postponement of their New Years Day visit to The Northolme and then last weekend, heavy snow and then rain led to the Proctor Cars Stadium surface being waterlogged and another match off as the home meeting with Ashton United fell victim to the weather.

But manager Paul Phillips has had other issues to contend with also.

He hoped to sign an experienced striker prior to Last weekend’s game but the player reported an injury picked up at St George’s Park and the move for the player was terminated.

Then prior to the trip to Hyde came further problems when Dan Wallis informed him that he no longer wanted to play meaning that Phillips had to move swiftly to bring in Wolverhampton Wanderers custodian Joe Young for the rest of the season. Young made his debut at Hyde and is the fifth goalkeeper Matlock have used in 28 league and cup games this season.

Regular number one Shaun Rowley broke a finger in November and is believed to be a good month off a return. Deputy Paul Cooper came in but could not win a regular start so Wallis was brought in during December. Wallis was cup tied for the FA Trophy defeat to York meaning Matlock had to draft in Sam Ogden.

Phillips is bemused by Wallis’ move, especially after impressing in the wins over Stalybridge Celtic and Buxton in his return to Matlock after a break of two years.

Speaking to Matlock Town TV after the Hyde win, Phillips said Wallis had “bottled it“.

In a separate interview Phillips added “Dan doesn’t feel he can progress at the club which I can’t really understand. Whether he’s had his head turned by other people I don’t know but I’m not aware at this stage of anyone in for him. He’s played in two big games, he did ever so well at Stalybridge where he kept a clean sheet and then he’s played in a big local derby in front of over 2000 fans and finished on the winning side. If you can’t take to the club after that then I don’t know what will make him take to the club!”

So Young (19) was drafted in and his second touch of the ball was to pick the ball out of the back of the net after he had pushed out a dangerous right wing cross less than a minute into his debut!

Phillips thought Young did well despite not having a lot to do.

“Joe’s come in and done ok but it was the defending that was the problem. We gave away two bad goals which isn’t really us. It was a good three points, we looked rusty early on, Hyde had played a league game and a friendly on Saturday when their game was off, Hyde looked sharper than us early on and I was disappointed with the goals we gave away. The goals weren’t Joe’s fault.”

Phillips was pleased with the performances of two goal Liam Hughes and Ross Hannah in attack, although he thought Hughes should have netted a hat-trick.

“He should have scored more and I’ve told him that, Ross has done very well and having Liam and Ross in good form improves us massively.” But Phillips returned his thoughts tom the frustration of his striker signing not materialising last week.

“We’d got everything arranged and the lad was coming into the club but he’s picked up an injury and that’s likely to keep him out for five or six weeks. We’ve got a lot of games in the coming weeks so we need to look elsewhere. We need to ensure we get the right one, we’ll keep our eyes peeled for that right man.”

The Bamber Bridge v Buxton game with South Shields visit to Mickleover were also off last Saturday while play off chasing Warrington Town’s visit to FC United of Manchester suffered the same fate. Play off contenders Whitby Town lost ground with a surprise 3-0 home defeat to Lancaster City. Then on Tuesday Buxton lost for a fourth successive league game, 2-1 at Scarborough but Bamber Bridge won 3-2 at Radcliffe.

Matlock head to Witton Albion on Saturday before taking on Scarborough at the Proctor Cars Stadium on Tuesday night.

Phillips is expecting two tough matches but says “let’s get Witton over first before talking about Scarborough.”

The Gladiators were 9-0 winners when Witton visited the Proctor Cars Stadium in September but Phillips says that is in the past.

“Witton are fighting for their lives, I watched them on Saturday and they’ll give us a hard game, That 9-0 counts for nothing, in fact they’ll probably be doubly determined to get the right result on Saturday after that defeat at our place.”

Phillips will no doubt tell his players, not for the first time, that there are no easy games in the league. He watched Buxton demolish Scarborough 5-1 before Christmas but the Seadogs turned the tables on Tuesday winning the return fixture on the Yorkshire coast.

This weekend’s other NPL Premier Division games include Buxton hosting Warrington, South Shields at home to Radcliffe, Bamber Bridge host FC United of Manchester and Whitby take on Atherton Colleries also at home. Then on Tuesday South Shields are at Ashton United.

As well as signing Young, Phillips has brought in young full back Liam Bell from Kidsgrove Athletic and Matlock have extended the loan of midfielder Nathan Okome from Chorley.