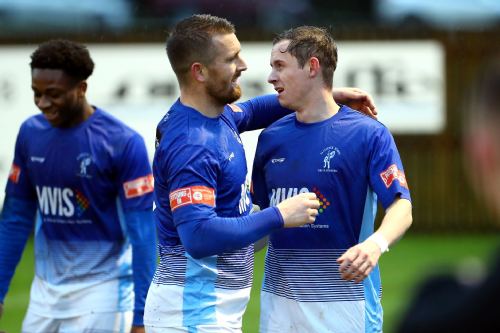 Matlock Town manager Paul Phillips says the Gladiators will be treating this coming Monday's top of the table home derby with Buxton "as any other one".

It's without doubt the match of the day in the NPL Premier Division, visiting Buxton being two points ahead of Matlock, both sides having played 21 matches to reach the half way point of the campaign in terms of games completed.

"We'll be treating it like any other game, one we want to win, a three point game. We know we'll go back to the top if we win and if the result goes the other way Buxton'll have a five points lead. Of course it's a local derby which gives it extra spice but the be all and end all is that we're playing for three points and the result won't make or break our season. The shoe though is on our foot to make the running."

Phillips was the Buxton boss before being appointed as the Gladiators manager in January 2020 and Matlock also have others in their ranks with Buxton connections in Callum Chippendale, Alex Byrne, Alex Wiles and Kayde Coppin.

"It's not about individuals, it's about the bigger picture and we don't need any extra incentive just because we're playing Buxton. If people do, they're in the wrong business. I haven't a bad word to say about Buxton, it's all about us getting back to winning ways after last Saturday's defeat to York and carrying on from where we left off when we won our last league match at Stalybridge a fortnight ago. If we can play like we did last Saturday but be a bit more clinical we'll win a lot of our games."

Covid 19 and the new Omricron variant is lurking in the background with the Welsh and Scottish Parliaments ruling games having to be played without spectators. Both clubs will be desperate for the derby to go ahead under normal conditions with a bumper crowd expected to show up at the Proctor Cars Stadium. Phillips said it would be " massively disappointing if the game is called off and eventually the season curtailed with Matlock making a strong push for promotion.

Assuming that all is well for Monday, Phillips agreed that the side that handles the occasion better, and not necessarily the fact that there will be a big crowd, has the better chance of success.

"I hope we have the majority of the spectators and obviously we'd want to make home advantage count. We got a good crowd in last Saturday and have had good attendances all season. Both teams have some experienced lads so while the crowd won't be a massive factor, I agree that the occasion element is important. For me we need to ensure we keep eleven men on the pitch, keep our discipline and not get carried away with any silly tackles."

The Gladiators FA Trophy run came to an end last weekend when National League North York City scored a minute into stoppage time at the end of the match to squeeze through into the last thirty two.

Phillips said in post match interviews that Matlock really needed to score first and had they been more clinical and scored when they were on top, they would have won the game.

"We've had a lot of different goalscorers and we always knew it would be the case. The likes of South Shields and Buxton have paid out big money for proven goalscorers, for us losing Ross Hannah and Liam Hughes for a good number of games hasn't helped our cause so other people have had to step up to the plate. We were the better team for most of last Saturday's game so credit to my lads for the way they performed."

Consolation in their Trophy defeat came with the news that Leaders Buxton had lost 2-1 at home to FC United of Manchester and third placed Bamber Bridge had gone down 2-0 at Gainsborough Trinity. South Shields' trip to Witton Albion was called off while Warrington Town were beaten 2-0 at home by Scarborough Athletic. That last result knocked Warrington out of the play off positions, Whitby taking their place after a 3-0 home victory against struggling Grantham Town.

"The league results were a massive bonus and we have a six point lead over the sixth placed club. We need to ensure first and foremost we stay near the top, a lot of teams can beat each other and with the pitches getting worse there'll be a lot of strange results. Now we have to put a run together and hope we've had our blip."

"Matt hasn't always been able to make training and we wanted him to be part of our training regime , he said he couldn't commit so to be fair to the other players, we decided to let him go back to Salford. For me, if you can't get to training on the Thursday when we're preparing for the Saturday game then you can't really expect to play on the Saturday. Luke's a very good player but knew what the situation was when he joined us. He couldn't play in the Trophy so that set him back a bit. He wants to play and I can't promise him that, so he's gone back to Sheffield to play games. We wish both lads all the best."

Striker Jerome Greaves missed the York game through illness and will need to be assessed to see if he has recovered in time to face Buxton.

But Luke Daly was fit enough to feature as a substitute against York, playing the final half hour.

"Luke did really well and after being ill needs time to get back up to top fitness. But he's a fit lad and someone who can come in and stamp their authority on the game which I'm sure our fans will see in the coming weeks. Not having Jerome was another blow to add to the goalkeeping problem we had. Sam Ogden did very well for us stepping in at the last minute but Dan Wallis will be back on Monday. Jerome would have been useful for us for when Callum Chippendale went off we didn't have that focal point up front and that helped York."

The Matlock boss also took time out to thank everyone at the club and wish them the compliments of the season.

"I'd like to wish everyone, committee members, helpers, volunteers and of course the fans a very happy Christmas and hope we can put a show on for them and put smiles on their faces on the 27th."