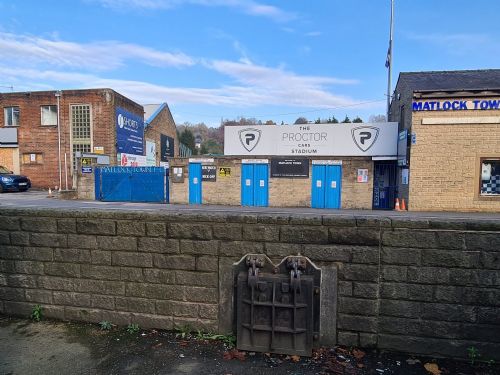 Matlock Town face another challenging season in the always competitive NPL Premier Division and will be looking to improve on last term’s encouraging fourth placed finish.

The Gladiators qualified for the play-offs and it was the least they deserved after leading the table for good chunks of the campaign, but their hopes of a place in the National League North were quashed when they were beaten 2-1 at Scarborough Athletic in the semi-finals.

So can the Gladiators make the next step and achieve their promotion dream? That’s the $64,000 dollar question and a look at the composition of the division for 2022/2023 suggests that again it will be a tough division to get promoted from.

The likes of South Shields, who surprisingly saw their promotion aspirations dashed despite being the one full time team in the league, will again be up there, backed by crowds of 2000 plus on a regular basis. While Buxton and Scarborough made the move up, Warrington Town missed out at the final hurdle losing the play-off final at Scarborough. The Yellows have regularly been top six candidates and will expect to be featuring again this season.

What about the new clubs? Guiseley, who finished bottom of the National League North, suffered relegation on the final day and after former Matlock boss Steve Kittrick came close to pulling the Lions clear, it’s now time for Danny Ellis to take over the managerial reins. Ellis has brought in former Matlock midfielders Spencer Harris and Luke Dean in what could be a season of consolidation at Nethermoor.

There’s a local derby for the Gladiators with Belper Town winning the Midland Division play-offs, but the Gladiators have lost more potential derbies with Midland Division champions Ilkeston Town, Mickleover and Basford United being transferred to the Southern League Central Division. Officials of both the Gladiators and the Nailers will be hoping for bumper crowds, especially if the fixture computer says the games will be played at Christmas and Easter.

There will be four more “new” clubs in the NPL top tier, with Liversedge and Marske United coming up from the Eastern Division while Warrington Rylands and Marine are promoted from the Western Division.

Liversedge, based in Cleckheaton, have made a rapid rise from the Northern Counties East League and will be looking to maintain the momentum this season. Matlock met Marske last season in an FA Trophy tie at the Proctor Cars Stadium, winning a thriller by 3-2. The prolific Adam Boyes again hit the headlines at the Cleveland based club, collecting an award from Ian Rush at the FA Cup Final as the leading scorer in last season’s competition with eleven goals,

Warrington Rylands have a number of players who Matlock fans will know. Striker Callum Dolan joined them at the start of last season and within two months of the campaign getting under way, Dec Walker and Sam Egerton joined him. Rylands are reportedly well backed financially and will expect to be battling it out with their town rivals towards the top of the division.

Marine are back after suffering relegation in 2018/19 and are now attracting four figure gates on a regular basis. Despite finishing fifth, they beat both Workington and Runcorn Linnets away from home to secure their Premier Division return.

Predicting what will happen is always difficult in non-league as things can change very quickly from season to season. Bamber Bridge surprised nearly everyone with a sixth placed finish after struggling in previous seasons, while Stafford Rangers rose from rock bottom to an eighth position in 2021/22.

Of course, Matlock would have surprised a lot outside of the club with their results, their achilles heel being the goals drying up in the crucial run-in. Defensively Matlock were sound, conceding the fewest goals, manager Paul Phillips will be hoping that the likes of Jake Day and Arron Opoku can find the net on a regular basis to solve the conundrum, with the midfield players also chipping in with a fair number.

Matlock’s squad is back in one day a week at present before the training schedule increases at the end of the month. Summer breaks appear to be getting shorter and the pre season friendly programme starts on Friday 8 July with a trip to Buxton and then a trip to Witton Albion’s ground to face Northwich Victoria on the following afternoon.

Phillips is currently on holiday so there could be more player news to report in the coming weeks. Matlock have appointed a new sports therapist with Alex Walker replacing Sarah Roberts.

Alex has experience in a number of sports including rugby, athletics and taekwondo and in football has been with Port Vale and Stafford Rangers.