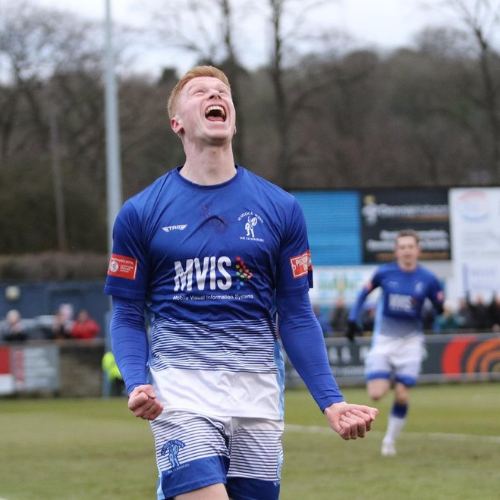 “These are the games you want to be involved in” said Matlock Town boss Paul Phillips ahead of the Gladiators’ top of the table clash at South Shields this weekend.

Saturday’s match at Mariners Park is a second successive top versus second clash for Matlock who came out on top against Bamber Bridge at the Proctor Cars Stadium last weekend. It is Matlock’s third top two clash in a little over a month when you include the home win against Buxton on December 27.

South Shields moved within three points of Matlock following a 3-1 home win against Witton Albion on Tuesday night, the Mariners having a game in hand. Should they beat Matlock by two clear goals, Shields will take over the league leadership.

“Of course it’s a really big game but there’s still sixteen games left so there’s a very long way to go” added the Matlock boss who along with assistant Dave Wild, agreed an extended contract until the summer of 2024 earlier this week.

“We want to be playing these sorts of games. I know I keep sounding like a broken record but at the start of the season most of our fans and a good many outsiders would say I ought to be locked up if I’d said we’d be top and three points ahead of them (Shields) at this point in the season.”

Alex Wiles first goal of the season and his first in a Matlock shirt, plus Reece Kendall’s eighth of the campaign put Matlock two ahead against Brig who pulled a goal back with a little over fifteen minutes left from the penalty spot. But Matlock missed some gilt edged chances to make their win more emphatic, a point not lost on Phillips ahead of the trip to South Shields.

“When you’re playing the better teams like Shields you need to be more clinical and take the chances you create. When we won up there last time we didn’t create that much but Alex Byrne took his opportunity and we won the game 1-0. It was 1-0 to them at our place earlier in the season. We had a lot of good chances against Bamber Bridge, we couldn’t put them away, we didn’t let that deter us but we must be more clinical. We’ve brought Terry (Hawkridge) and Marcus (Marshall) in, Ross Hannah’s chomping at the bit to get in so we have the ammunition.”

It’s a battle of the two Phillips with South Shields having recently appointed former Premier League striker Kevin Phillips as their new manager in succession to Graeme Fenton. Kevin Phillips has won his first two games in charge, scoring three in both games, at Warrington and at home to Witton.

“I hadn’t really thought about the two Phillips issue” said the Gladiators boss.

“I think I’m the better looking!! Listen, I’ve utmost respect for a player who has achieved a hell of a lot at the top level and I’m really looking to pitting my wits against someone of his stature. I wish I was a pound behind him then I wouldn’t have to go out on the scaffolding business every day!”

Paul Phillips is hoping to bring an end to his counterpart’s winning start as Shields boss.

“When clubs bring in a new manager there’s often that new manager syndrome with good results to start off with because of the expectation. They would probably have expected to win against Witton. We had them watched on Tuesday and at Warrington last weekend. He’ll no doubt have done his homework and know what to expect from us. But let’s hope we can go up there and bring that winning run of his to an end.”

A bumper 3000 crowd could be in attendance with Tuesday’s home game attracting 2378. When Matlock won there in October 2020, the crowd was restricted to only 300 because of Covid.

“If you’re not motivated to play in front of crowds like that, then you’re not in the right business. There’s not a lot between the teams as the last two or three matches between us have proved. They’re a good team make no mistake, they have good players and we have the utmost respect for the way they go about their business. But we’re going to go there and give it a go, there’s no point going there to defend for ninety minutes, we gave them too much respect at Matlock and didn’t start playing until the last twenty odd minutes after they’d scored.”

South Shields are the league’s only full time club so will fitness be an issue?

“I think we’re as fit as anyone, so far I don’t think anyone’s looked fitter than us. The fact that they have no work all week is in their favour but maybe it puts a little more pressure on them? We’ll have to see but it’s a game we’re really looking forward to.”

Hawkridge and Ryan Qualter, who extended his contract with the Gladiators earlier this week, may need fitness checks after picking up injuries in the Bamber Bridge win. Meanwhile loan midfielder Nathan Okome has been recalled by parent club Chorley while midfielder John Pritchard has left for Radcliffe having not played a competitive game for the Gladiators since arriving at Matlock in the summer.