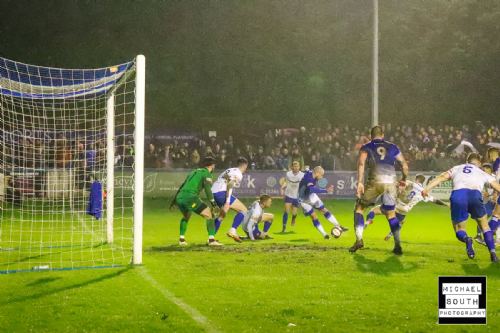 Matlock Town go into 2022 as Northern Premier League Premier Division leaders after a dramatic Bank Holiday Monday home victory against Buxton in a top of the table clash.

The Gladiators took over top spot from their local rivals after coming from behind to Brad Jackson's 28th minute goal to score twice in the second period through Ross Hannah on 62 minutes and Reece Kendall thirteen minutes from time in front of a huge 2155 crowd, the highest for a league match at Causeway Lane since 12 May 1977 when the Gladiators were beaten 4-1 by Northwich Victoria in another crucial top of the table match.

On Monday Buxton did not help their cause by having midfielder James Hurst sent off just before the half hour mark, but a delighted Matlock boss Paul Phillips says that he was confident his side would still have won the game had it been eleven a side throughout.

"People talk about the red card being vital but I still think we'd got too much for them on the day. Let's face it Buxton's had two worthwhile shots throughout the game. I thought we were a bit passive early on but then we took the game to them. We tweaked one or two things in the second half putting them on the back foot and I think it would have been unjustified had we not won."

The Matlock boss admitted though that he and the players had spoken at length about the importance of staying disciplined in a derby in the lead-up to the game.

"For me staying disciplined was vital in a big derby in front of a big crowd where expectations are high, discipline could either win you or lose you the game. I thought the referee managed the game really well. We wouldn't have wanted Buxton to have the lad sent off we'd have liked it eleven versus eleven."

Phillips praised both of his goalscorers for their contributions.

Hannah came off the bench shortly before the interval to replace brother in law Liam King and twice had the ball in the net only for his efforts to be ruled out before it was third time lucky in the 62nd minute.

"I thought it was going to be one of those days, I spoke to both liners who said Ross moved a bit too soon for the disallowed goals. We've had one of the liners a few times and he's a really good official. It was a matter of us keeping doing the right things which we did. Ross gives us a better dimension when he comes on although at 35 we have to handle him correctly to get the best from him. He's a fantastic footballer, I can't remember playing against him but he must have been something really special ten or so years ago in his prime."

"Reece was man of the match for me, he started in defence, moved up into midfield when we altered things and put in a really good performance. We always have something in our locker from set pieces with the likes of Liam Hughes, Reece, Ryan Qualter, Ioan Evans and Callum Chippendale who like to attack the ball in the penalty area. We're really competitive in both boxes and in this league this is where games can be won or lost.I was disappointed with the way we conceded on Monday in the second phase but overall I thought we defended very well."

Phillips described the attendance as "unbelievable."

"It's a credit to both clubs whose fans exchanged friendly banter, lots of noise and a fantastic atmosphere and I don't think there was any trouble at the game. I was glad we could put a spectacle on to respect that. These were two good teams. Listen you can dress it up how you want but in the last few years Matlock have been struggling down the wrong end of the table but this year we're up at the top. It's a different pressure from relegation but one we should all want more of."

Matlock now head to 17th placed Gainsborough Trinity on New Years Day and Phillips wants his side to make it three league wins on the trot and not waste the efforts of the Buxton game in reaching the summit.

The Gladiators beat the Holy Blues 3-0 on August Bank Holiday Monday and while their away form has been generally poor with only five points from thirty three on their travels, at home Trinity have lost only once, drawing six and winning five.

"They're a good side and we're expecting a hard game. We're going to enjoy Monday's win but it doesn't define anything in terms of winning anything. This is one of a number of tricky games we face in January, we got a good derby win but we don't want to blow it all away. We know we're there to be shot at but that's credit to the lads, when you look at the massive financial backing that South Shields and Buxton get, also Warrington, there's only Bamber Bridge of the other sides up there who don't get massively backed and Milly (Jamie Milligan)'s doing a tremendous job there. It's to the boys' credit that we're well in there with a shout, people would have thought me raving mad a few months ago if I'd said we'd be top of the table at Christmas."

Phillips clearly is looking at the title or at least winning the play-offs as he looks ahead to 2022.

"We've got to look at achieving something, we had a good run in the FA Trophy, the FA Cup the least said the better, we let everyone down. So we've got the league to concentrate on now and we want to put together a good run of wins to stay up there.I'd like to wish our fans a very happy new year and we'd like to make it one for them."