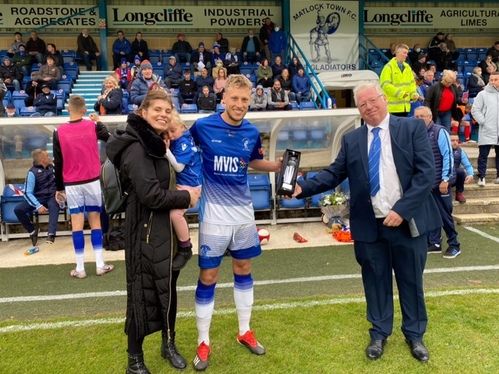 Matlock go into Saturday’s FA Cup 2nd Qualifying Round clash at Grantham in good spirits following a home win over Stafford Rangers last weekend and the midweek 2-2 draw at home to Basford United.

Gladiators fans making the trip to the South Kesteven Stadium will be hoping Matlock show the same attacking finesse that at times tore Basford apart for what will undoubtedly prove to be tough tie against their Pitching In NPL Premier Division rivals.

Liam Hughes and Danny Greenfield found the onion bag against Rangers while on Tuesday night, Reece Kendall and Hughes again, his fourth goal in three matches, netted against Basford, Town twice coming from behind to earn their draw.

“It’d have been better if we’d got the full six points but I’d have taken four before the two games” said manager Paul Phillips.

“The way we began both games, we should have been out of sight, it’s disappointing that we couldn’t put our chances away early doors. But against Basford especially we showed a lot of grit and determination, our great character was there for all to see and the lads are all tremendously disappointed we didn’t get all three points.”

After looking water-tight in their previous two matches and having conceded only once in four competitive matches prior to Tuesday, Matlock were not quite as efficient defensively against Basford.

“We tried to overplay in areas where we didn’t really need to, so both goals could easily have been avoided, but if you look back say eight months, we’d have probably folded in that situation, so we need to take the positives. I’m looking at the all round team performance which was very good with everyone contributing.”

Phillips admits he isn’t a fan of the Grantham ground which doubles up as an athletics stadium and he also acknowledged that facing the manager he replaced at Buxton, Martin MacIntosh gives the tie added spice.

“The ball spends too much time off the playing area and I’m expecting it to be windy there so the lads will have to dig in and work hard for a result. It might not be a classic. Martin’s teams always ask questions of you, they have players who were at Buxton before and while I was there who’ll probably have a point to prove. But we’ll go there wanting to keep an unbeaten run going and I’m confident we can get a result wherever we go.”

The Gladiators picked up a couple of knocks on Tuesday but Phillips expects them to have cleared up by the weekend. Kade Coppin will sit out the game through suspension after his two yellow cards to equal a red against Stafford.

On the injury front, Callum Chippendale is approximately a fortnight away from a return while Craig King “is not far away” according to Phillips.

“We think he’s about there but we’ve got to manage it carefully, the last thing we want is another long time out for him. We’ll ease him back, he’s chomping at the bit to play.”

Goalkeeper Jon Stewart is to have his knee scanned after coming off in Matlock’s home pre season friendly with Sheffield.

In further playing news, Lewis Turner has departed to join Scarborough Athletic while Matlock are looking to extend the loan of midfielder Danny Greenfield from Gateshead. Greenfield’s current loan spell runs out after Saturday’s tie.

“Lewis did ever so well for us and we did everything we could to try and keep him” Phillips explained.

But his mind was made up, so if a player doesn’t want to be here, then there’s little point in holding on to him. No player’s bigger than the club and I think we’ve enough people in the defensive positions to see us through. It’s a shame for Jake (Hull) at the moment, but those in his position have been exemplary. Lewis going will probably give Reece (Kendall) a new lease of life, his energy levels are immense and he’s come in against Stafford, played well, then scored against Basford and he’ll be disappointed not to have scored at least once more.”

Matlock’s opening two home league matches have attracted crowds of 453 and 444 despite social distancing measures that have been introduced due to Covid-19. The Basford attendance was particularly encouraging with evening games tending to attract a lower crowd than usual, the 444 being at least 100 more than normal at night, with only around 20 having made the trip up from Nottingham.

“I’d like to thank all our fans again for their fantastic support, the two crowds we’ve had so far have been brilliant” said Matlock Chairman Bryn Apperley.

“The Basford game was a tremendous advert for the NPL and I’m sure everyone had their money’s worth and will want to come again. As a club we’ve shown we can accommodate fans in a safe manner and in a safe environment. I’d like to thank all those people who’ve worked so hard to make it possible and the people of Matlock who’ve come down and backed us, adhering to procedures that have been put in place.”

The Stafford game was actually game number 502 in Matlock’s colours for their club captain who joined them from Shirebrook Town in March 2009. His 500th game came in an opening day loss at Bamber Bridge seven days earlier.

A firm fans’ favourite, Yates has been named as supporters player of the year four times and in a poll of NPL fans held in 2018, he finished fifth as fans voted for their all time best player.