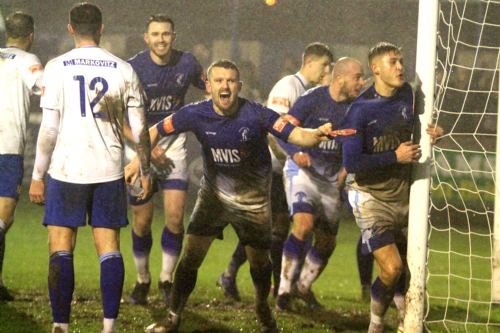 With Covid-19 affecting the Gainsborough Trinity players causing the postponement of Matlock Town’s New Years Day visit to the Northolme, most Matlock Town fans expected their side to lose the NPL leadership to local rivals Buxton, beaten by Matlock on the previous Monday.

But there was a pleasant surprise for them as Buxton let slip a 2-1 lead at home to Stafford Rangers to lose 3-2 to remain a point behind Matlock, now having played a game more. The Gladiators could easily have finished the day in third spot had Bamber Bridge and Buxton won, but Brig were comfortably beaten 4-1 at play off contenders Warrington Town who could yet make a bid for the title. Whitby Town also went down 2-0 at Morpeth, the only result that didn’t go Matlock’s way was South Shields securing a single goal home victory against Scarborough Athletic to go third, two points behind Matlock, both teams having played 22 matches.

“But ideally we’d liked to have played and we don’t want any more games called off if at all possible. The busy Christmas period’s over now but we’ve got a busy two or three weeks ahead of us with games on Saturday and midweek and then things will hopefully settle down a bit.”

A busy January now starts this Saturday with a home clash against Ashton United before the Gladiators travel to Hyde United on Tuesday night.

After comfortably beating Matlock 2-0 on the opening day on a day when Matlock simply failed to turn up, Ashton have surprisingly struggled and are currently down in eighteenth spot.

“It’s hard to say whether Ashton are in a false position, what I will say is that they’ve had a lot of injuries. They’re from near where I live and I see them quite a bit. I’m expecting a very tough game. When you get to after the Christmas period it’s a lot easier to play against teams lodged in mid table with nothing to play for in terms of promotion or relegation, but Ashton need the points as do we, they’ve underachieved so far this season and will be looking to put that right.”

The first day loss at Ashton is still clear in Phillips’ mind.

“We were terrible and that gave us a jolt as we went on a good winning run after that. We were definitely second best and it shows that in this league it can be all about what happens on the day, anyone can turn up and beat anyone else.”

Ashton’s close neighbours Hyde have also had a below par season including a management change with former Stockport County boss Jim Gannon taking over from Dave McGurk shortly after their 2-1 defeat at the Proctor Cars Stadium on August 21. Inconsistency appears to be a big thorn in their side, recently winning 2-1 at South Shields, yet losing 4-1 at home to struggling Mickleover, a game watched by Phillips last Saturday.

“Hyde have some very good players with the likes of Tom Pratt and Liam Tongue so they’re certainly a team not to be taken lightly. There’s the artificial pitch which is another thing to take into account. Mickleover deserved to win on Saturday but Hyde had probably three or four players missing that will most likely be back against us so we can’t read too much into last weekend’s score.”

On loan striker Jerome Greaves is going back to Rotherham United after spending four months with the Gladiators who hope to have a replacement in time for the Ashton clash..

The 6’3” striker scored three goals and the decision was made after talks between Phillips and the Millers.

“He’s been unfortunate as injury and illness has affected him which has meant he wasn’t the same player we had when he first joined us when he was a hell of a player. We’ve talked with Rotherham and decided that the best thing for him is to get some games. We’ve been talking to an experienced striker and hopefully all of the paperwork can be sorted before the game on Saturday. We’ve got Liam (Hughes) and Ross (Hannah) and Jez (Uchegbulam) can play there but I feel we’re a bit light in that area. We need someone who’s tried and trusted and done it at a higher level and this lad fits the bill.”

Results elsewhere were not the only good news points for Matlock fans last weekend. They were thrilled to hear that winger Alex Byrne had signed a new two year deal. Byrne currently is Town’s leading scorer with ten goals and has a massive twenty four assists to boot.