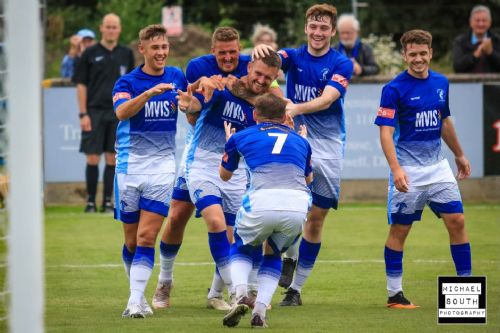 Matlock Town’s management believe that the one division difference between the Gladiators and Saturday’s FA Cup visitors to the Proctor Cars Stadium, Belper Town, counts for nothing as the local rivals prepare for the local derby clash.

Belper, in the Midlands Division of the NPL, have won just one of their four league matches to date, while Matlock, after five league victories on the trot are in third spot in the Premier Division, just a point behind the leading two of South Shields and Buxton.

“I don’t think this one division difference means anything, in the FA Cup especially with it being a local derby. Belper’s got good players there, we know about them and had them watched. The Belper game gives us that opportunity to build on the community spirit we’ve got at the club, to swell the link between the fans and the team and I hope we can put on a performance to thank our fans.”

Manager Paul Phillips had his say, basically echoing the thoughts of his assistant.

“ We know what Belper are about, they’re a blood and thunder team and we need to ensure we all do our jobs. We’d like a good run in the FA Cup as management and players to give something back to the football club for the great way they look after us and also to our fans who give us fantastic support.”

It was an excellent bank holiday weekend for Phillips’ men, Monday’s win following a fine 2-0 win at fancied Warrington Town. Goals in each half from Jesurun Uchegbulam and substitute Callum Chippendale gave the visitors a much more comfortable win than they perhaps imagined when they set off for Cheshire. Goalkeeper Shaun Rowley scarcely had a shot to save in the ninety minutes.

Then on Monday a trio of headers saw off Gainsborough, Jerome Greaves netting a brace in the first half before defender Ryan Qualter scored the third midway through the second period.

Reflecting on the two holiday wins Phillips was full of praise for his squad.

“We couldn’t have asked for any more, the lads have been fantastic. To play the number of games they’ve had to and get such great results is excellent, two thoroughly professional performances and I think we got the team selection right, I can’t thank the lads enough.”

The early fixture list promised a tough start for the Gladiators.

“They (the fixtures) couldn’t have been much more difficult could they? To get wins at the likes of Nantwich and Warrington, two established teams expected to be in and around the play-offs and know what they’re doing is great for us, our lads have had to sacrifice a lot with the run of games. Then we played Gainsborough and with all respect to Gainsborough, we didn’t get out of first gear, we used the squad and freshened things up a bit.”

Phillips though is a hard man to please.

“I’m not happy with just being third, I want to win the league, I’ve said this since Day One. I think we’ll see more consistency in results when the league settles down, say after ten games, a tally of 20 plus points would give us a decent platform to kick on.”

Monday saw a first appearance of the campaign for captain Liam Hughes following suspension and personal issues, Hughes coming in for Uchegbulam who had a slight hamstring problem. Uchegbulam is expected to be available to face Belper as will striker Ross Hannah who has now completed a three match ban following his red card against Basford United.

Phillips announced that midfielder Craig Carney will be leaving the club after being unable to cement a place in the side.

“Craig’s a very good player and unfortunately for him he’s not managed to feature for us. He leaves with our thanks and best wishes for the future” said the Matlock boss.

Matlock are due to travel to much improved Stafford Rangers on Tuesday, subject of course to the Matlock v Belper and/or the Rushall Olympic v Stafford FA Cup ties don’t finish all square. The replay at the Raygar Stadium, if required, is set for Tuesday.

“Stafford’s had some decent results this season but really I concentrate on us. The clean sheets have come back and that’s very pleasing.”