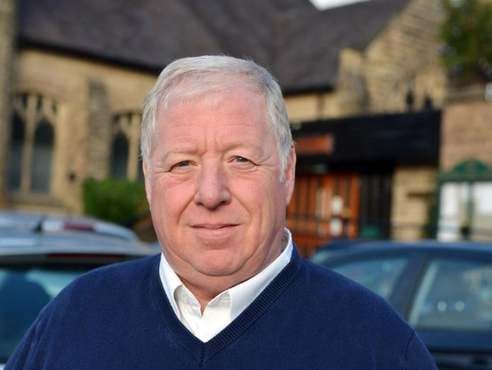 Mr Apperley (61) has been the Gladiators’ Vice Chairman for the past four years and says that following some “very difficult” times for the club, he can’t wait to get stuck into the job of reviving Matlock’s fortunes both on and off the field.

Production Manager at IKO plc on the outskirts of Matlock, he is married with two grown up children and after supporting the Gladiators as a boy, he started watching Everton where he was a season ticket holder for 25 years.

“ I saw the light” he joked. “My wife Julia and the kids, Sarah and Ed are all huge fans of both Everton and Matlock, they really enjoy coming down to watch our games. The atmosphere down at Matlock’s tremendous and we’ve all come to love the place! I’m absolutely delighted to be named as the club’s new Chairman and I’d like to thank my fellow board members for giving me this opportunity to lead the club. I’ve really enjoyed working with Tom when I was Vice Chairman and it’s tremendous that he’s staying on as Commercial Manager, something he’s done exceptionally well over a good many years. Of course he’ll be about helping me and offering his advice along the way.”

Tom has every confidence that Bryn is the right man to succeed him.

“Bryn’s an excellent choice as Chairman with the drive, energy and enthusiasm to succeed. His four years in the Vice Chairman role will stand him in good stead, he’ll have a very good understanding of what’s involved and of course he’ll have my full support and that of the rest of the board to drive Matlock forward.”

Bryn takes over at a crucial time as the club and country strives to recover from the icy blast of the Covid-19 outbreak. But Matlock faced more problems before the virus took hold, fighting a relegation battle before the 2019/20 season was declared null and void and picking up the pieces from the untimely and shocking death of 25 years old midfielder Jordan Sinnott.

“Jordan’s death hit players, officials and supporters really hard and add to that the curtailment of the season the future looked quite dismal” Bryn reflected.

“But a typical magnificent effort by everyone connected with the club, coupled with the overwhelming generosity of not only Matlock supporters but football fans from far and wide saw us through a very tricky time. James Griffiths ran the Just Giving fundraiser that has brought in over £17,000 and everyone behind the scenes has played their part, we made it quite literally by the skin of our teeth.”

Despite a poor league campaign, Matlock’s average home attendance increased from 447 in 2018/19 to 473 last season, a fact not lost on the incoming Chairman.

“Our supporters have been superb and although last season was difficult for us all, we still managed to see an increase in our average home gate. We’ve all got to admit that the football was below par but they still turned up in their hundreds, another great testament to the togetherness we have at the club. We look forward to their continued support next season.”

The Covid-19 factor has the non-league game in a state of uncertainty but Bryn and his colleagues behind the scenes are busy preparing for when NPL football returns, whenever that may be.

“Now we re-group and we have a very experienced and knowledgeable management team who are working hard to put together a great squad of players. We’re all refreshed and raring to go, whenever that may be. Personally I can’t wait for the football to return!”

Bryn’s replacement as Vice Chairman is still to be discussed by club officials.

It will be the first Chairman/Manager meeting since Mr Apperley took over from Tom Wright earlier this week.

“I talked with Bryn quite a bit last season and he’s a top bloke. He’s obviously got the club at heart and I think it’s a good fit. Hopefully we’ll enjoy exactly the same sort of relationship I had with Tom, I’m looking forward to working with him” said Phillips.

Phillips will also be watching current and potential new signings prepare for the coming season in the third of a series of informal training get togethers.

“Obviously social distancing requirements are being strictly observed . We had one in Manchester last Saturday and lads turned up for an 8 am start which shows their dedication even at this early stage. Then on Tuesday we had a little session at Halifax and it not only helps the lads fitness wise with the long break we’re having but it helps to integrate the new lads and keep everyone ticking over.”

Phillips has players signed but is keeping their identity in house at present. Having long term injury victims Craig King and Nathan Whitehead involved will be like the club having two new players. Both have undergone serious knee operations, King having been out since February 2019 while Whitehead was forced off the field in the home win over Gainsborough Trinity last August.

“Kingy’s as fit as a butcher’s dog and he’s coming along well. Nathan’s rehabilitation’s also going well although I feel it’ll be January or February before he’s back fully. At least the break’s given the two lads more time to recover.”

Phillips also confirmed that he and his management team have completed the bike ride of 865 miles, the equivalent distance between John o’Groats and Lands End, to raise money for the NHS in the Matlock area.

The total raised on the Just Giving page at 9pm on Tuesday was £1130.

“The football club had such a great response to their fundraising appeal and we just felt we had to do our bit. I know it’s not been easy this past few weeks for people to dig into their pockets but we thank everyone who has contributed. Once we can get access to the money the cheque will be off to the NHS” said Phillips.