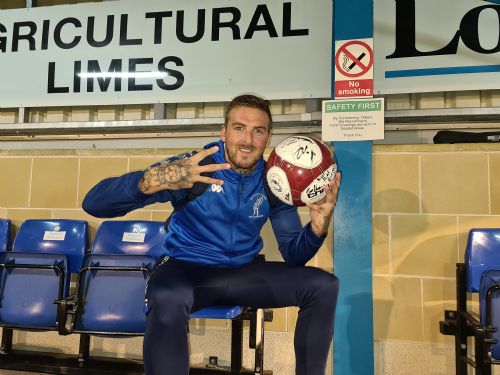 Everything slotted into place at a damp Proctor Cars Stadium on Tuesday night as Matlock thrashed visiting Witton Albion 9-0, It was the Gladiators’ record NPL home win, eclipsing 8-0 victories against Southport and Knowsley United in 1979/80 and 1995/96 respectively.

Tuesday also saw Matlock win in the league for a seventh successive game to be handily placed in second spot in the NPL Premier Division, two points adrift of leaders South Shields but with a game in hand. An eighth win on the spin in Saturday’s rearranged game at Stafford Rangers would hand the league leadership with Shields in FA Cup action.

So after the horror show in the FA Cup defeat by Belper, Matlock have responded magnificently, Tuesday’s goal rush coming hot on the heels of Saturday’s 2-1 home win against Stalybridge Celtic.

Matlock boss Paul Phillips was obviously delighted with both wins as he spoke directly after the Witton match.

“I don’t think we know how good the Stalybridge win is yet as they’ve gone to Scarborough tonight and won 3-0. We got both the reaction we wanted and the win after what happened in the FA Cup and that’s important.”

Reflecting on the win against Witton, Phillips found time to try and offer comfort to his opposing boss Carl Macaulay.

“Carl’s a great manager and Witton are a great club, I feel for him for after all, you never know if you’re going to be on the end of a scoreline like that. I remember Carl thumping me 5-0 when I was at a previous club, so we have to be gracious, I’m sure Carl will sort things out at Witton.

It was a night when virtually everything went 100% right for the Gladiators.

“I think we got our tactics and our shape dead right and we were ruthless in front of goal. There was energy and purpose all over the pitch, I think we outmuscled them. I think we might be getting somewhere near something that replicates the team we want out on the pitch. Callum Chippendale, Liam Hughes and Alex Wiles have had time out for various reasons, missing two or three games or more but they’re coming back now and getting better with every game.”

Phillips was pleased with man of the match Hughes who netted a hat-trick, his first goals of the season.

“I’d told him he’s got to score more goals and tonight he got excellent service, his sharpness is coming back although he’s not one hundred per cent there yet and he could have had a couple more goals.”

Actually Tuesday began badly for Phillips when it was confirmed that central defender Sam Egerton would be moving to Warrington Rylands.

The NPL West Division club and current FA Vase holders have offered Egerton, who lives close by, a lucrative contract.

“We did our very best to keep him but he’s been offered a two year contract on very good money. When we came to the club we set parameters for contracts, Sam’s 29 and we keep a close watch on who we offer contracts to. We have to be aware of our wage bill and we can only do so much and it’s important that the club stays on a stable base, it’s the same rules for everyone and we won’t move the goalposts” Phillips explained.

Sam’s been excellent for us and we wish him all the best for the future.”

Winger Jonathan Wafula also left the Gladiators and he made a scoring debut for new club Grantham Town in the Gingerbreads’ 2-2 draw at Ashton United on Tuesday.

“Jonathan came to us and we had high hopes for him. To be honest we had a few words along the way as I felt he was treating the club like a holiday club rather than a football club and that’s not going to happen. You get out what you put into the club and he didn’t put his heart and soul into things. But look at Craig King, he’s come back, is working hard, he’s been patient and done really well looking good in his 35 minutes or so tonight. He knows the standards he’s got to keep, Kingy’s a fantastic player and a fantastic lad.”

So attention now turns to Stafford on Saturday, the Rangers having had a mixed few days. After winning 3-1 at FC United of Manchester last weekend, they were beaten at Hyde United in midweek.

Phillips will be doing his utmost to prevent Matlock from getting carried away and suffering a repeat of the Belper result in the FA Cup.

“We don’t want an after the Lord Mayor’s show game. Yes we’ve won seven on the bounce but we won’t be resting on our laurels. It’ll be tough, a different type of test. We’ve sent someone to watch them tonight, the pitch’ll probably be a bit bobbly and they’ll be in our faces. They’ve got the very long throws of Tom Tonks so we’ll need to be fully on our game. Stafford’s never an easy place to go to, even when they’ve been near the bottom of the league.”

Phillips confirmed he has a seven days notice of approach in for a central defender and hopes that a move could be confirmed prior to the weekend. He is also in touch with Football League clubs to add a striker to the Matlock ranks.

Midfielder Lirak Hasani has also returned to Doncaster following his month’s loan with the Gladiators. Striker Ross Hannah is probably a fortnight away from a return following his pulled hamstring.