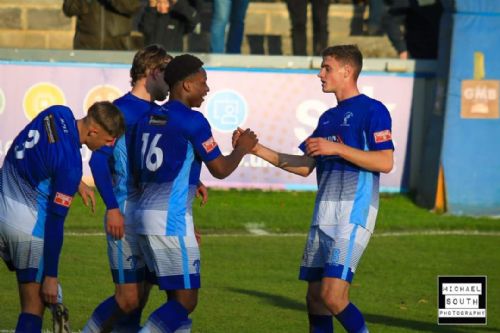 Matlock Town boss Paul Phillips says some home truths were uttered in the dressing room during the week prior to last Saturday’s FA Trophy victory at Rushall Olympic. It appears that they had the desired effect.

The Gladiators returned from Dales Lane with a 4-0 victory over their hosts who sat in fourth spot in the Southern League Premier Division Central and before their defeat at Banbury prior to facing the Gladiators, had won six matches on the spin. Matlock scored twice in each half through Liam Hughes, Ryan Qualter, Matt Sargent and Jesurun Uchegbulam to put them in Monday’s draw when they were given a home clash with Marske United.

Phillips agreed that the performance at Rushall was Matlock being back like their old selves.

“It was very much back to what we’re used to, back to normal, more like ourselves. We’d had the lads in training on both Tuesday and Thursday and we’d told them in no uncertain terms that they’d let their standards slip not only against Whitby but a couple or so times in recent weeks. Against Rushden although we won, we weren’t really at the races. It’s just not about playing well, it’s making sure the graft and the hard work’s there and we need that if we’re going to take this team where it needs to go. These things should come naturally, they’re a given as far as we’re concerned.

Having scored as a substitute in the previous two matches the pacy Jesurun Uchegbulam was given a start in attack alongside skipper Liam Hughes and put in a man of the match performance when there were also a host of outstanding displays in the Gladiators side.

“You could see what Jez’s all about, now it’s up to him to keep his place. Having Hughesy back gave us a big lift and our bench will be stronger with Ross Hannah back in the squad after suspension. Our squad will have stronger depth for I might have a couple of additions come the weekend. The striker I mentioned last week’s been ill but he’ll be at training on Thursday and we’re also hoping to add a midfielder from a Conference North side.”

Phillips had to make an enforced change in the goalkeeping position for the Rushall tie after Regular number one Shaun Rowley broke a finger in training last Thursday. Paul Cooper, who had played in the preceding round against Rushden & Diamonds and would have probably played on Saturday anyway, came in and made a couple of important saves and kept a clean sheet.

“Similar to Jez, it’s up to him now to keep his place “Phillips added.

“He grew into last week’s game and made a couple of good stops. He needs to be more vocal and proactive but the be all and end all is the clean sheet.”

Cooper certainly has a chance to stake his claim now with Rowley possibly being out for eight to ten weeks.

“Shaun’s finger’s badly broken, it’s in a cast for another eight days or so when the medical people will see if he needs an operation. I’m trying to get a goalkeeper in on loan to cover, it’s a big blow though for Shaun.”

Cooper will therefore make his NPL debut in the long trip to Morpeth Town on Saturday, a side Phillips says is in a false position.

The Highwaymen currently lie in fourth bottom spot but are showing improved form of late.

“They’re very much so in a false position, they’ve got quality in their side and by all accounts were unlucky not to get more than a draw at Buxton. So we need to continue from last Saturday. It’s a long journey up there and we’ll be playing on astroturf again. We’re top of the league so we’ll be a scalp for them so we have to make sure we do all of the right things that have put us where we are.”

Callum Chippendale (thigh) will be monitored ahead of the trip to Craik Park.

The FA Trophy tie with Marske will take place at The Proctor Cars Stadium next Saturday, replacing the scheduled home meeting with Scarborough Athletic which will be rearranged for later in the season.

Marske are currently in the NPL Eastern Division having lost only one league game to clear leaders Liversedge and overcame both South Shields (3-0) and Chester (4-0 in a replay) in the FA Cup. In the Trophy, the Seasiders have beaten Glossop North End, Bridlington and FC United of Manchester to reach this stage.

“They’ve got a big budget with some experienced players and are probably trying to emulate what the likes of South Shields and Morpeth have done, so it’ll be a hard game. We never get an easy game but we’ll relish it. before then though there’s an important league game and all of our attention has to go on that.”

Buxton now lie menacingly only a point adrift of leaders Matlock and have two games in hand. Third-placed South Shields are two points behind Matlock having played the same number of matches while surprise package Bamber Bridge are fourth four points off top spot.

The Bucks travel to Lancaster City this weekend while Shields host Gainsborough Trinity and Brig travel to Witton Albion.