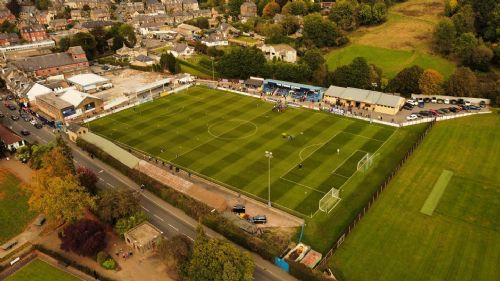 Disappointment filled the air at full time last Saturday when the final whistle blew to hand Matlock a 1-0 defeat in their top of the table clash with South Shields but manager Paul Phillips wants to put the loss behind them as they bid to embark on another unbeaten run starting at Lancaster City this weekend.

A 62nd minute close range header from Darius Osei handed Shields all three points and although the Gladiators still lead the table, the Mariners are now level on points with them, both teams having played sixteen games.

Full time Shields at times showed why they are title favourites but they had to withstand fierce Matlock pressure in the final twenty minutes and were fortunate to survive penalty claims when a Ross Hannah shot was clearly handled by a defender.

“It was a game we grew into, we gave them too much respect in the opening forty five minutes . Once we went behind we realised we were on the same pitch as them for a reason and I think we created the best chances of the game in the second half.”

Phillips was convinced at the time that Matlock should have had a penalty and after looking at the video footage he has seen nothing to alter that view.

“Everyone in the ground could see it was a clear handball, and incorrect decisions in the last fourteen days have cost us. The penalty went against us at Atherton in the dying seconds and then we don’t get an obvious one last Saturday so for me, incompetence has cost us. Hopefully these decisions will even themselves out as the season progresses.”

“We were unlucky in the end not to get a point, there was a great turnout from the supporters and when we eventually took the handbrake off, I think they saw more of the real us. We can’t take anything away from South Shields who are rightfully title favourites, Remember they’re full time and they’re a great outfit. It was great to see such a great crowd in the ground.”

With Matlock’s fine start to the season, expectations have understandably been raised amongst the Gladiators faithful.

“We want that, no-one puts more expectation on us than the staff and myself, the important thing is to manage those expectations. Think back a year when we went to South Shields and did exactly the same to them as they did to us on Saturday. Everyone was disappointed with the result but it also shows us where we want to be and the progress this club’s made . To have the points tally of 36 from sixteen games during a chaotic start to the season and to be in front of Buxton and South Shields, even though it’s only on goal difference from South Shields, is fantastic. Ask anyone, myself included, I’d have snapped your hand off. Hopefully we can carry on in the same vein and the fans can keep the great support going.”

Phillips is expecting a physical affair at the Giant Axe on Saturday . Matlock have now ended their early season midweek programme and can now look forward to only Saturday matches until Christmas.

“The Lancaster game won’t be one for the faint hearted” said Phillips.

“They’re big, strong and powerful. We had them watched at Radcliffe last Saturday and they’ll be hoping to bounce back from their defeat there. They’ve got some experienced lads. We’ve got to pick ourselves up now and go on a good run and bounce back like we’ve done before this season.”

South Shields and Buxton play each other in the match of the day in the north east, so points are going to be dropped by either or both of the other top three clubs.

“A draw would help us massively and it’ll probably help South Shields that Buxton had an FA Cup replay on Tuesday night. But we need to look after ourselves and go and get our job done at Lancaster.”

Phillips is boosted with the news that injuries appear to be clearing up and he could have virtually a full strength squad to choose from. Reece Kendall, who has been in impressive form so far this season in his left wingback role is available again after serving a one match ban against South Shields and defender Jamie Sharman is not far off a return to action.

“We utilised the squad last Saturday and having lads back gives me a headache but it’s a nice headache to have. I’m hoping we’ll not have the injury issues we’ve had now games are on Saturdays for the next few weeks.”