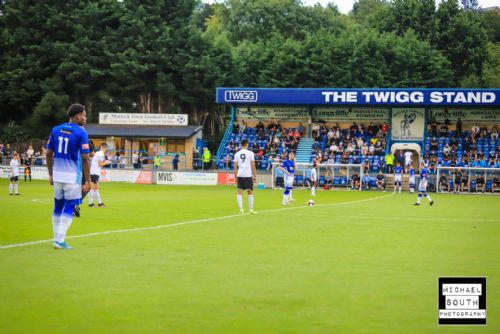 Manager Paul Phillips looked back on an enjoyable pre season campaign for Matlock Town so far on Tuesday night as his charges prepared to take on Chesterfield at the Proctor Cars Stadium twenty four hours later.

“It was always going to be enjoyable after such a long time away. We trained last night (Monday), but the games have been tough but rewarding.”

Matlock will be hoping they can replicate the form of pre season prior to Chesterfield when their league season gets under way at Ashton United on August 14. Following the expected victory over Wirksworth Ivanhoe, they followed up with further victories against Boston United, Derby County under 23’s and a very strong Mansfield Town line up last Friday night.

Phillips though says he is equally pleased with the way local fans are getting behind his side.

“For me everyone at the club and especially the fans have embraced themselves in what we’re doing, we’ve had some magnificent crowds so far in pre season, it’s been great to face the calibre of sides we have and get the amount of fans we’ve had through the gate.”

Pre-season was a particular challenge for defender Reece Kendall. Following the retirement of Adam Yates, Phillips was looking for someone to step into the role in his three man central defensive shape and Kendall has fitted the bill, drawing praise from Phillips.

“Reece has been magnificent as a centre half and with Ryan Qualter and Sam Egerton we have strength there. We may need cover for that position but looking at the bigger picture with the players we’ve got in, there’s two top quality players for each position and everyone will need to stay on top of their game.”

Wirksworth Ivanhoe apart, the Gladiators will have faced teams from further up the footballing ladder after the Chesterfield visit but the remaining fixtures take on a different complexion as they visit teams below them in the non league pyramid.

They are at Newcastle Town this Saturday (kick off 1 pm) before they make the trip to Clipstone on Tuesday night to compete for the Marcus Beddoe Trophy as both sides remember a young player who featured in both the Gladiators development squad and the first team at Clipstone.

There’s then two more trips both to NPL East Division opponents in Sheffield on Saturday 31 July and Ossett United on Saturday 7 August.

“This is more our bread and butter. In most of the games so far we’ve been the underdogs and it’s alright going into those sorts of games as you’re expected to be under pressure. No disrespect to the next four opponents, but we’re no longer the underdog, we’re expected to boss the games so we’ll find out just how good a team we’ve got. We’ve got to make sure we

continue to do the right things in both boxes like we’ve done so far, make sure we stick to good traits.”

Matlock’s league opener at Ashton sees him return to face a club he both played for and manages while Mark Lees, Sam Egerton and Kadse Coppin will also be returning to familiar territory.

“We have to play everyone twice so when we go there doesn’t really matter. They have a good manager, some cash behind them and are attracting players from higher levels so it’ll be a tough test, but one we’ll relish” Phillips added.

There is one alteration to the Gladiators’ NPL Premier Division fixture list with the two games against Warrington Town having a change of venue. Matlock will now travel to Warrington on Saturday August 28 and will host the Yellows on the season’s final day, Saturday 23 April.

Phillips also paid his personal tribute to the late Ernie Moss, the Gladiators having paid their respects to him at both the Mansfield and Chesterfield matches.

“I’ve played against Ernie’s teams and it was always a pleasure to do so, I think it’s fitting that there’ll be lots of tributes to a true footballing person.”